Ballmer to retire from Microsoft within 12 months 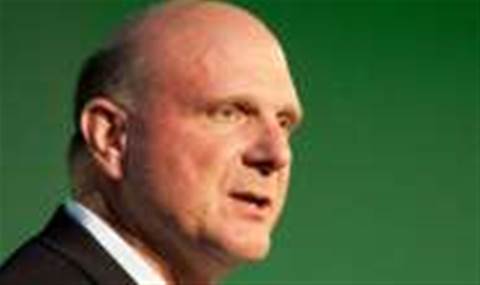 Steve Ballmer, a passionate salesman who has been a central figure at Microsoft Corp for more than three decades, unexpectedly announced his retirement as chief executive on Friday, ending a controversial 13-year reign in which the world's largest software company lost its position as the dominant force in computing.

The surprise move sent the company's share price up 7 percent, reflecting a widespread view that Ballmer is not the man to reverse the fortunes of a company that remains highly profitable but has failed to navigate the transition to the mobile computing era.

Ballmer's planned exit comes just weeks after the company announced a major reorganisation and delivered an earnings report that showed across-the-board weakness in the business, including dismal sales of the company's new Surface tablet and a lukewarm reaction to the crucial Windows 8 operating system.

Microsoft said it had engaged the executive search firm Heidrick & Struggles and would consider both internal and external candidates to succeed Ballmer - underscoring the lack of a succession plan at a company where many talented executives have been squeezed out over the years. Ballmer will stay on for up to a year until a new CEO is found.

A close friend and confidant of co-founder Bill Gates since the company's earliest days, the 57-year-old Ballmer formally notified the company two days ago of his intention to retire, according to a regulatory filing. In an interview with the trade publication ZD Net, director John Thompson said the search for a successor had in fact been underway for some time.

"We are well down the path in the search," said Thomson, who is leading a search committee that also includes Gates.

Still, the timing of the announcement and the lack of a succession plan suggest the recent setbacks may have spurred the company's board to act. Gates remains chairman of the board, which has historically followed his lead.

Ballmer himself acknowledged his decision was abrupt.

"There is never a perfect time for this type of transition, but now is the right time," he wrote in a memo to employees. "This is an emotional and difficult thing for me to do. I take this step in the best interests of the company I love."

Ballmer has faced criticism from investors for years as rivals led by Apple Inc and Google Inc came to dominate huge new markets in smartphones, tablets, Internet search and cloud computing even as Microsoft remained reliant on the traditional personal computer.

Activist investing fund ValueAct Capital Management LP said in April that it had taken a stake in the company and shortly after began agitating for a change in strategy and a clear CEO succession plan.

Microsoft, like Apple, has been under pressure from shareholders to hand back more of its cash hoard, which now totals US$77 billion.

"This might accelerate more shareholder-friendly capital returns of that cash treasure trove, which would help in the revaluation of the stock to more appropriate levels," said Todd Lowenstein at fund firm HighMark Capital Management, which holds Microsoft shares.

There are no obvious candidates to succeed Ballmer at a company that has only had two CEOs in its 38-year history. Ballmer had once indicated that he intended to stay at least until 2017.

Ballmer can claim some important successes: revenue tripled during his tenure, profits doubled, and the company scored a big success with the Xbox videogame business. The Windows and Office franchises remain highly profitable, and Microsoft is well-entrenched as a vendor of corporate computing products and services.

At the same time, though, repeated forays into mobile phones, tablets and music players have come to grief. The Surface tablet, aimed at the hugely successful iPad, alienated longtime hardware partners even as it failed to generate significant sales, and a phone partnership with Nokia has thus far yielded little for either company.

At the same time, the company has lost billions trying to compete with Google in the Internet search business. Some of Microsoft's corporate computing businesses are also under threat from the industry-wide transition to cloud-based services.

The recent reorganisation was aimed at reshaping Microsoft - once primarily a purveyor of packaged software - into a company focused on devices and services, essentially mimicking Apple.

Yet most industry watchers felt it was too little, too late, with some calling on the company to back away from the consumer products sector and focus on serving businesses.

In the ZD Net interview, Ballmer rejected that approach. "Nobody has ever managed to figure out how to build a device for a user that was just enterprise or just consumer," he said. "These core experiences do span 'consumer and enterprise.'"

Passion at the top

Ballmer, a forceful, often emotional leader, was regarded a great salesman rather than a brilliant technologist.

A physically imposing presence with a booming voice, his motivational efforts were the stuff of legend: a clip of a semi-hysterical Ballmer screeching and dancing around the stage to rally Microsoft employees has been viewed nearly five million times on YouTube.

Yet the antics sometimes acquired an air of desperation as Apple and other rivals produced industry-changing innovations that Microsoft couldn't match.

"That is the most expensive phone in the world and it doesn't appeal to business customers," Ballmer laughed in a TV interview after the launch of Apple's iPhone in 2007. Five years later, iPhone sales alone were greater than Microsoft's overall revenue.

A Michigan native, Ballmer studied applied mathematics and economics at Harvard, where he met Gates. Several years later Gates persuaded him to drop out of Stanford Business School to become Microsoft's first commercial manager and the company's 30th employee.

To induce him, Gates offered Ballmer part ownership of the company, and when Microsoft incorporated a year later, Ballmer had almost an 8 percent stake. That formed the foundation of his wealth which is now valued at $15 billion by Forbes magazine.

Ballmer remains one of the largest holders of Microsoft stock, with about four percent of the company. His net worth, ironically, soared by nearly a billion dollars on Friday as the stock market celebrated his departure.

Microsoft shares closed up 7.3 percent at US$34.75 on Nasdaq on Friday.