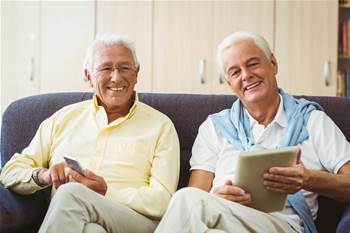 Faced with a growing customer base of technology-savvy aged care residents, Thomas Holt knew it had little choice but to ride the wave or face being drowned by it.

The aged care not-for-profit had the perfect opportunity to transform the way it provides care with the greenfields build of its new Seymour Shaw residential care home in Kirrawee.

It also had to contend with reforms to the sector announced in the 2015-16 budget, which aimed to give Australians more choice when it comes to aged care.

Thomas Holt claims its newly-launched 120-bed Seymour Shaw facility is the “most technologically advanced facility” of its kind in Australia.

Immediately obvious are the robots, sensors, and wearable devices used by staff and residents, as are the circadian rhythm light fittings installed across six floors to help regulate sleep.

But the centrepiece of this facility is the LiveCare360 platform, which allows residents, family members and staff to do everything from order a meal or call a nurse, to check in on a family member's health.

An orchestration service integrates data from a variety of sources into a customer relationship management platform that provides a single view of the resident, accessible through a portal open to staff, residents, relatives and health providers.

The platform meshes internet-of-things data - from sensors installed throughout various points in a resident’s room - and operational data to provide a 24/7 view of the individual.

The readings are fed into a clinical management system that uses predictive analytics to trigger an action at certain points; for example if a person’s blood pressure rises beyond a specified level.

This data can also be used to prevent situations before they arise; elderly people, for example, are at greater risk of falling if they have a urinary tract infection. Having this knowledge means Thomas Holt can take steps to prevent or mitigate such an outcome.

Just as importantly, the platform aims to satisfy a generation of retirees much more technologically savvy than their predecessors.

Baby boomers are “in many ways a privileged generation being the first generation to grow up in an era of increasing affluence and prosperity”, according to a 2014 Department of Health report [pdf], and they come into aged care with much higher expectations than previous generations.

Going from your own home - equipped with strong wi-fi and myriad mobile devices - into an aged care facility with bad connectivity and an ageing television is just not an option, Lymbers says.

“Why should you miss out on your lifestyle because you have to be in a care facility?” he said.

The LiveCare360 portal provides a way for residents to do everything from order their meals, watch programs, and Skype with family, to listen to music and audiobooks.

It similarly allows their family members to check in on what the resident has been doing that day - anything from what they watched on television to how their health is tracking, as well as the ability to contact their carer if any concerning data surfaces.

Rather than having to spend time taking readings and measurements, a staff member can now sit down and have a conversation with the individual.

It also reduces Thomas Holt’s reliance on increasingly hard-to-find health professionals: Health Workforce Australia in 2012 estimated there would be a shortage of more than 100,000 nurses by 2025 - something Lymbers says Thomas Holt is experiencing first hand.

“Most facilities will do one nurse to four patients; we’ve now been able to move from one to six,” he said.

Thomas Holt is planning to further roll out the platform to its supported home living clients.

This project has been named a finalist in the healthcare category of the iTnews Benchmark Awards 2017/18. The full list of finalists can be found here.