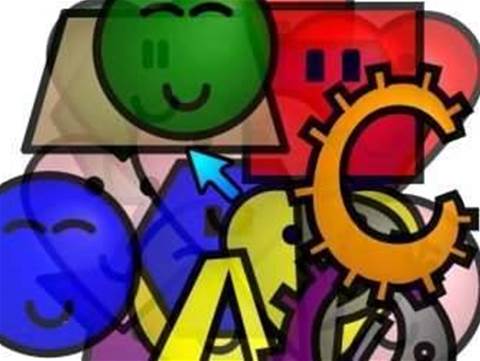 A free educational game for babies that is controlled by mashing a computer keyboard has already achieved 20,000 downloads in less than two months.

Called BabySmash, it was created by respected .NET developer Scott Hanselman, who works by day as a senior program manager in the development division of Microsoft.

Inspired by his eight-month-old crawling across his computer keyboard while he was on a Skype call, Hanselman set about creating a way for babies and small children to bang on the keyboards of his Windows-based computers ‘without hurting anything’.

The result is BabySmash, a free game that draws letters, shapes and numbers based on how the baby smashes the keyboard.

Benefits listed include that it ‘keeps babies happy’ and that it ‘won’t harm your computer’.

The latter is because the application locks down important keys like Windows, Ctrl-Esc and Alt-Tab, confining the baby to the application and also preventing anything from being accidentally deleted, according to Hanselman.

“As soon as a developer has a child, they want to develop a game for them,” Hanselman told iTnews at the Microsoft Tech Ed 2008 event in Sydney.

The application was created by Hanselman using the Windows Presentation Foundation (WPF).

Hanselman used a novel way to invite contributions to the project from other developers - he wrote ‘horrible’ code and then released the source for it via codeplex.

“I wanted to use WPF but didn’t get a book. I just thought to myself ’I’m going to write this wrong’,” said Hanselman.

“I thought ‘I’m going to sit down with a new technology [WPF] but re-use my 15 years’ development skills in older technology, put it out as horrible code, then get WPF experts to come in and refactor the code subsystem by subsystem’”.

Releasing the source code has also invited several important contributions. In particular, a New Zealand developer is now collaborating with Hanselman to port BabySmash to Silverlight.

Hanselman anticipates that the Silverlight version will likely act as a taster or cut-down preview for people wanting to test it before downloading the full version.

A key limitation of the Silverlight version will be that it doesn’t lock down certain keys as in the WPF version.

Hanselman said he has also received a huge amount of feedback on the application, ranging from features that could be added to other offers of support.

“I’ve had offers to redo the voiceovers professionally,” Hanselman said.

“I also received a recording of someone’s child saying BabySmash - and made that the opening sound [for the application].”

Hanselman said there are no plans to commercialise BabySmash.

“It’s just fun - something like this I don’t think should cost money,” explained Hanselman.

“I would much rather focus on the education value for the child and the adult programmer. I can push WPF to its limits because it’s much more fun when babies are involved.”
Got a news tip for our journalists? Share it with us anonymously here.