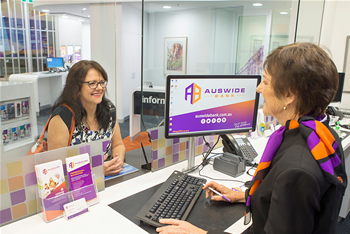 Auswide Bank is almost a year into a wide-ranging transformation program that aims to uplift its people, processes and technology to prepare it for the next decade.

In the final episode of the iTnews Podcast for 2021, Auswide Bank’s chief transformation officer Rebecca Stephens describes the multi-faceted transformation she was brought in to lead and run at the start of this year.

Auswide Bank is an ASX-listed regional bank with its head office in Bundaberg. In recent years, it has expanded out of Queensland - where it has 17 branches - to offer loans and other services in other states and territories.

The bank is “coming off a very strong year in terms of its performance,” Stephens said, which in part enabled it to appropriately resource a transformation effort.

“The opportunity to consider the future is always more possible when things are going well,” Stephens said.

At a high level, Stephens’ role as chief transformation officer is to help the bank reimagine and plan for its future; create initiatives and actions to achieve that vision; and then to execute on it.

“That’s the part that I'm very much engaged in at the moment is making the program of work happen,” she said.

“We've spent this last period of time going through that imagination process and going through that planning process, but the thing for me that really lights me up is actually being able to execute on the thinking and demonstrate to people that the change is possible.”

The transformation is occurring across four pillars that, together, make up a “digital framework”.

The pillars aim to improve the bank’s service offering to its brokers and customers; provide more choices in how customers can engage with the bank and its branch network; automate processes; and uplift digital experiences, with a view to attracting a new generation of customers.

“That has to be underpinned by the foundations of making digital work well, so we're thinking about things like data, cyber security, and modular systems,” Stephens said.

“Just as importantly, we’re focused on our digital culture and ways of working.”

Stephens said the work is deconstructed into a series of “structured phases, or even structured sprints”.

The bank had some digital initiatives underway prior to Stephens’ appointment.

“I think my arrival was about giving them real clarity and being very clear on the choices in front of them,” she said.

Auswide Bank may not have the large, complex suite of legacy systems that make change difficult at larger banks, but it still had challenges in the way data flowed between the systems it did have.

“There are many points where the data doesn't flow in the way that we would like and that immediately requires manual intervention,” Stephens said.

The bank had attempted to automate some of these flows in the past but - in Stephens’ words - had “been challenged to get it up and running in a way that everybody was comfortable” with.

In moving down the path of process automation again, the bank took lessons from its earlier attempts, notably that it sought to show the potential for change to a wider spectrum of the bank, not just specific pockets, and that it chose to work with areas of the bank that were interested in process automation.

The objective of taking a “broad-brush approach” to automation was to create a range of successful automations, in turn creating advocates across the bank that would smooth the path for future phases.

The bank conducted a series of workshops with Simplyai, an intelligent automation consultancy, to come up with a pipeline of potential automation candidates.

Simplyai also provided resources for the bank’s chosen automation stack, UiPath, particularly during the early stages of the use of the technology.

The first process to be automated triages customers that want to talk to a banker about a financial product and who put their contact details into a web form to receive a callback.

“What would happen traditionally is that information would then pass through to our customer operations team who would then arrange to have that customer's details provided to the appropriate person in the organisation to make a call,” Stephens said.

“Sometimes it might be a good period of time before that information was picked up and passed to the right person to make a call.

“With [software] robotics things happen very, very quickly. We were able to roboticise that process to the point of getting the lead to the person who needs to make the call and it takes all of six seconds.

“That's been a really powerful example for us of the impact it can have on customer experience, even before you look at automation opportunities to improve efficiency.”

The bank is now moving forward with a second tranche of automations, which will include revisiting areas where initial automation attempts pre-dating the current transformation were unsuccessful.

This is the final episode of The iTnews Podcast for 2021. We will return with a new season in February 2022.

Until then, you can listen to the full 2021 season or subscribe at Apple Podcasts, Google Podcasts, Spotify, Amazon Podcasts or wherever else good podcasts are found.