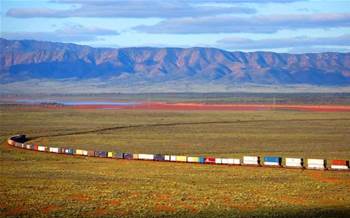 Full-steam ahead for trial of modern tech.

The Australian Rail Track Corporation, in conjunction with US aerospace giant Lockheed Martin, has begun shadow trials of a digital signalling system for the country's trains.

The ARTC is the federal government agency responsible for managing most of Australia’s interstate freight and passenger rail network.

Until now, trains on Australian railways have generally been controlled by analogue systems, where mechanical signals alongside the track are used to tell drivers which sections of track they are allowed to travel on.

In some cases, this technology is over a century old, and prone to failure. It can also be difficult for network operators to know precisely where a train is on a network or how fast it is travelling.

By contrast, modern digital signalling systems - such as the ARTC's advanced train management system (ATMS) - display real-time signalling information directly to the driver on a display inside the train cabin.

Digital signalling has been common for railway networks across Europe and Asia for a number of years.

However, despite its benefits, Australian railway and public transport operators have until now been slow to embrace the technology.

Tim Ryan, ARTC’s executive general manager of enterprise services, told iTnews the agency was currently running a shadow trial of ATMS on trains between the South Australian cities of Port Augusta and Whyalla.

“ATMS uses GPRS to gather speed and location information from trains, and then send instructions to the cabin. It potentially also allows us intervene remotely if a train is travelling too far or too fast,” Ryan said.

“Phase one was effectively laboratory trials of the technology – benchtop testing. In phase two, we trialled the system with a Land Rover on tracks,” Ryan said.

“Right now we’re in phase three, where we’re running ATMS on trains in shadow mode, in parallel to existing signalling."

Assuming the trial is successful, ARTC plans to begin rolling out the technology across Australia in 2017, with the Nullabor railway between Tarcoola in South Australia and Kalgoorlie in Western Australia the first to be upgraded.

The ATMS trials come after ARTC switched its communications systems from its own legacy analogue networks to Telstra’s Next-G network in 2012.

After shutting down its legacy communications networks last year, ATMS this month signed a 10-year extension to its deal with Telstra that also saw the infill of blackspots across the Nullabor Plain. It uses satellite as a fall-back solution.

“Going from analogue to digital opened up applications such as remote train health and location monitoring,” Ryan said.

“We needed a digital network for a number of applications, including something as simple as sending an email to a driver.

“We decided to go with public networks so we’re not the only user, meaning Telstra is obligated to fix any issues with the network. We also don’t have any in-house digital network capabilities.”

Ryan said he expected rail freight companies using the network to begin rolling out internet of things applications, such as remotely monitoring the temperature of carriages, over the coming years.

“We assume there will be a myriad of different [IoT] platforms used by freight rail companies. So our fundamental principle was to provide a digital network that would be technology-agnostic,” he said.