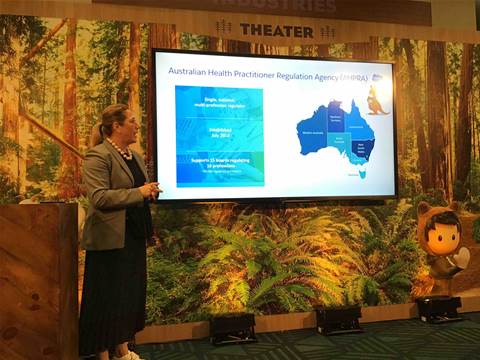 The Australian Health Practitioner Regulation Agency is using a digital transformation project to kill manual processes and workarounds it agreed to when it was formed by subsuming 35 organisations and their work.

The agency, known as AHPRA, regulates 16 health professions nationally. It registers practitioners, for a fee, and acts as a central authority for handling patients’ complaints about health services they receive.

However its genesis as an amalgam of dozens of state and territory organisations meant it agreed to non-uniform processes to appease the organisations it consumed.

“As you can imagine when you’re consuming organisations and you’re trying to make this whole national scheme work, you do things that perhaps in hindsight you wouldn’t do again,” AHPRA’s executive director of business services Sarndrah Horsfall told Salesforce’s Dreamforce 18 conference.

“You amalgamate all the different professions and all their processes and forms, and you create a beast.”

AHPRA used a “lean review” process in 2014-15 - coinciding with Horsfall joining the agency - to tame the beast.

“What it found was we had created over 8000 process steps by consuming all of these organisations, trying to appease everybody,” she said.

“We [also] created a beast that involved some system-based and some manual workaround processes.

“About 37 percent of our processes were purely noise, not adding any value.”

The lean review proved to be the “tipping point” for AHPRA and the professions under its wing. It showed to the professions - and the national boards that oversee them - just “how complicated they were.”

When practitioners tried to register through AHPRA, they would be confronted by a PDF form. The agency created “over 300” such PDF forms between 2010 and 2014.

The forms also asked the practitioner to sign a declaration at the end before submitting; again, this was not standard, and there were 10 different versions of the declaration in use.

If patients wanted to lodge a complaint against a practitioner, they also had to fill out a PDF form. Once lodged, the form would be scanned, and AHPRA complaints-handling staff would then print it out and manually re-type the data into the agency’s systems.

Workflows were largely manual and required staff to switch between systems and paper to progress registrations.

“If you go to someone’s desk even at the moment they have post-it notes, spreadsheets, Word documents, and CRM and they’re trying to manage their workflow like that,” Horsfall said.

Staff used their own email calendars to set reminders for action items in the absence of a central workflow management tool.

AHPRA also collected reams of documents in support of registration applications. The agency wanted to move away from this and be able to verify source systems of these documents rather than rely on what they were given.

“We have is a lot of documents sent to us,” Horsfall said.

“We consume documents and store millions of documents that we might glance over rather than go look at the primary source of that information and verify it.”

Aside from the huge storage and manual handling costs, AHPRA also wanted to strengthen its ability to detect identify fraud in the system.

“We have problems with people who steal identities,” she said.

“At the moment because we’re authenticating digital documents it doesn’t mean the person putting them in is the right person.”

With a lot of unforeseen complexity, AHPRA is much larger than it had anticipated being.

“Our headcount in 2010 was supposed to be 34. We’ve just tipped over 1200 so you can imagine trying to do everything for everyone has created an impossible position for us to move forward,” Horsfall said.

“Thirty-four probably wasn’t the right number of headcount but neither is 1200. So it’s about how do we get that balance right”.

Out of the lean review process came a mandate to completely transform and digitise the regulatory system run by the agency - what Horsfall calls “version number of two what we had already created back in 2010.”

AHPRA is characterising its digital journey as a “digital house … because it started with a single front door”.

“But you can’t have a front door without anything else so we’ve created a ‘house’,” Horsfall said.

“We’ve built a ‘digital house’ and we’ve built some foundational componentry. Our digital platform is Salesforce which will help us enable some of the new processes and workflow some of the manual tasks and automate a lot that we’ve previously done.”

The digital house business case was approved in May 2017. Work since then has been focused on on-boarding different cohorts under AHPRA’s gaze, and adding to the base functionality.

“A lot of [the work] is around the customer-based design and I can say to you right now that we haven’t got that perfect, but it is really hard to design a new process when your internal customers are telling you what the process is today,” Horsfall said.

“Part of it is trying to help them think quite differently about information - how you extract and code data, and then what the experience piece is like rather than just digitising what you’ve got.”

Horsfall said that AHPRA has created a “common case framework” so that workflows and systems feel “roughly the same” no matter which part of AHPRA a staff member is in.

AHPRA is also trying to adopt agile across the organisation, though Horsfall admits the agency is “kind of limping between waterfall and agile”.

“Unless you’re a purely digital business, it’s very hard for a government-type organisation to get into that space.

“But we have laid the foundations for that and hopefully we’ll be able to really build on that moving forward.”

One of the main goals of the digital transformation is to create an environment that does not inhibit the ability of staff to process registrations, for hospitals and other employers to vet prospective employees, and for patients to lodge complaints about experiences with Australia’s health system.

To enable that, AHPRA is planning regular new releases over the next three years “to increase our flexibility to manage future change”.

Horsfall showed slides of the agency’s goals from its digital house strategy. It is hoping to streamline processes, reduce risk and enhance the customer and staff experience.

For staff, it wants to offer a “responsive digital solution that makes tasks simpler”, while for external customers it wants to offer “a step change in service that is considered leading in the health regulatory space”.

Future registration lodgments will be backed by an “end-to-end process” that guides applicants to the next set of questions depending on their prior answers.

The system can handle user-uploaded documents and can verify provided information at its source.

“So instead of rocking up to our reception with your passport and us thinking we know what a fake passport looks like, you type your passport number in the system and it will verify it’s authentic,” Horsfall said.

“That will save us a whole lot of information we don’t need to collect.”

There are ‘save’ and ‘resume’ functions built into the digital process, allowing applicants to enter details when they can, rather than in one hit.

Once a form is completed, “it workflows itself into our case management system” where staff can view it and monitor its progress.

“We’re able to see where an application is up to at any point in time,” Horsfall said.

“We do things like criminal history checks which take time to go out and come back.

“There’s no point in registration officers worrying about that. They need to then work through the other types of registration information to assess whether or not the application is acceptable for registration.

“Now, once the criminal history check comes back in, it flips into their inbox in Salesforce and they know they have the last piece and can finalise the application.”

AHPRA is also able to better deal with staff on annual leave or sick leave, since responsibility for applications can be easily re-assigned and the history goes with that reassignment.

AHPRA built a large number of proof-of-concepts to help its various stakeholders see what change would look like.

“One big learning point for us is PoCs are gold,” Horsfall said.

“A lot of people can’t visualise what it will look like but if you build a PoC you can tell them roughly what it looks like then they’re sold. The only problem then is they want the PoC in production as soon as possible.”

AHPRA tested the new digital process and system on graduates as they tried to register to work in health for the first time in October 2017.

“It probably wasn’t the best way to test it because [while] they loved it, the next day they were asking ‘well why aren’t I registered?’, because [after lodgement] it hits a manual process and then you have to go through a process that takes a couple of months so they weren’t very happy [about that part],” Horsfall said.

However, with the first test completed, it has now moved on to apply the digital platform to other registered health professionals.

The most recent go-live on September 3 was for paramedics. This does not replace a previous registration system as it is the first time that paramedics have ever been registered in Australia.

“There’s 16,000 of them and the uptake on the paramedic registration process has been phenomenal,” Horsfall said.

“We’ve got over 4,000 applications already in the system, and then the experience they’ve had is it’s 20 minutes to fill their application form, pay their money, and they’re done. That has been great feedback for us that we’re on the right track.”

Horsfall envisions a future-state where every health practitioner in Australia has their own “digital token”.

The token would not only house their updated registration details but also show AHPRA where they work at any particular point in time.

It would also have the capability of sharing with hospitals, clinics and other employers the real-time status of that practitioner’s registration.

“To have that tokenised view and real time view is so important because we could be putting someone in [a hospital] who may have been OK yesterday but today has changed,” she said.

“It’s now about how we make that real time and build it into the ecosystem of health.”

Horsfall suggested a token could also contain facial recognition attributes to make it easier to authenticate practitioners throughout the health system.

She suggested tokens would also be useful to practitioners, saying that it would be important to create an ecosystem of potential use cases around them.

“I want to create something for health practitioners that makes them want to come back to us every day,” Horsfall said.

“It’s trying to draw them in so they’re information isn’t out of date.”