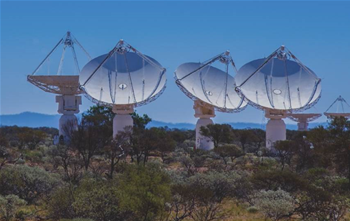 The Australian Square Kilometre Array Pathfinder telescope has captured a signal emanating from a cosmic event in a galaxy far away, just four days into becoming operational.

Known as fast radio bursts (FRBs), the signals are short, sharp spikes of radio waves that last a few milliseconds.

Scientists are still pondering what causes FRBs, but believe they stem from powerful events that took place billions of lightyears away from Earth.

Termed FRB170107, the signal comes from the edge of the star constellation Leo. The researchers estimate it has travelled through space for six billion years before hitting the ASKAP telescope in West Australia at the speed of light.

The FRB was extremely bright, the researchers noted, and combined with the distance it travelled, the energy involved would be enormous, making the phenomenon harder to explain.

"We turned the telescope into the Sauron of space – the all-seeing eye," Dr Bannister said.

With the eight dishes, ASKAP can see 240 square degrees at the same time, covering an area about a thousand times the size of the moon.

ASKAP is operated by the CSIRO and is located at the Murchison Radio-astronomy Observatory in the mid-west region of Western Australia.