Australian PPC-1 cable cut, out of action until March 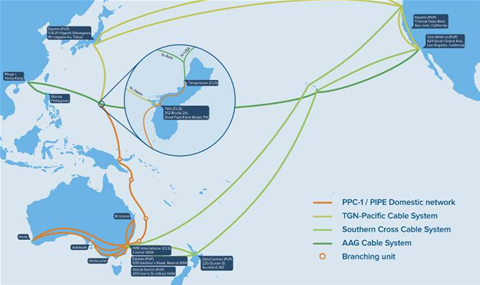 The PPC-1 Australian submarine cable running between Sydney and the United States island territory of Guam has been fully severed, with the repair estimated to take around a month to complete.

Internet service provider TPG said in its service status notice that the fault was discovered on February 5 at 8pm AEDT.

After receiving an alert that a submarine line card for the cable had lost its payload, TPG engineers and the provider's infrastructure vendors found a fault around 4590 kilometres from Guam.

A repair ship will be dispatched and the estimated time of service restoration is Monday, March 7, TPG said.

The PPC-1 cut follows a fault on the electricity transmission part of the Basslink cable, which will necessitate the adjoining data fibre-optic link to be cut as the Alcatel-Lucent operated repair ship Ile de Ré lifts up the damaged part of the circuit.

The two-fibre pair PPC-1 spans 7000 kilometres, and in its current configuration with 10 gigabit/s 1550 nanometre wavelengths, the cable has 2.56 terabit per second capacity. TPG said the cable can be upgraded to 40 Gbps wavelengths with new station hardware, boosting capacity to 7.68 Tbps and ultimately, to 10.24 Tbps.