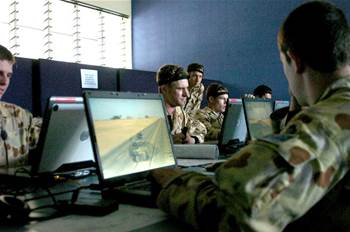 The Australian Defence Force has upgraded a seven-year-old core battlefield simulation system used to prepare individuals and teams of up to 100 soldiers for battle.

Army personnel have used the Virtual Battle Space (VBS) simulator since 2005, when VBS1 was used to train soldiers deploying to Iraq.

Defence licensed VBS2 2.0 from system developer Bohemia Interactive for $2.8 million this month to improve terrains, viewing distances, artificial intelligence and other features. The upgrade will be rolled out in the third quarter of 2012.

A Defence spokesman told iTnews that the upgrade would provide "a range of technical improvements, such as longer viewing distances, improved networking support, increased processing power and much larger maps".

"Typically, VBS2 is used by individual soldiers and combat teams of over 100 soldiers," he said, noting that its uses included tactical training and Area of Operation (AO) familiarisation.

"[It] can simulate a wide range of military capabilities including naval and air capabilities ... most of the Australian Defence Force and a range of coalition weapons systems [are] represented."

The upgraded simulator was expected to deliver a wide range of foundation war fighting and mission specific scenarios — such as operations in urban terrain.

"Army has, or is in the process of developing, terrains for all of our key training ranges and other areas that support mission-specific training of our personnel," the spokesman said, noting that the VBS could simulate any land, sea, or air platform to varying levels of fidelity.

Among other new features, VBS2 2.0 will introduce full terrain paging, armored and aviation enhancements, realistic underwater and scuba diving and improvements to parachuting and free-fall simulations.

The upgrade also provides trainees with more realistic AI behavior. New computer-controlled units have a much better understanding of their surrounding terrain, allowing them to move through smaller spaces and use various features of the terrain for cover.

New maps will cover a maximum virtual distance of 300 x 300 kilometres; up from 100 x 100 kilometres in the previous version.

The spokesman said VBS2 2.0 would support scenarios, models and data sets from earlier versions. The existing PC fleet will be used to run the upgraded VBS2 system.

"[VBS2 2.0 is] one of Army's core simulation systems [which is] used for a wide range of training tasks," the spokesman said.

Defence currently runs the Virtual Battle Space simulator on about 1000 desktop machines and 150 laptops, the majority of which are within the Battle Simulation Centres located in Darwin, Townsville, Brisbane, Adelaide and Puckapunyal.

"Typically PCs [designed to run VBS2] have an Intel i5 or i7 CPU, 4GB RAM, 1GB NVIDIA Video Card and 1 Gab network card," the spokesman said.

"Some of these PCs are also fitted with specialised interface devices that replicate the controllers found on armoured vehicles, helicopters and other military platforms."

The Australian Army is said to be one of the first organisations to use the VBS product for collective military tactical training and mission rehearsal.

Defence's spokeperson said it did not consider the VBS as a gaming system. However, a version of the product was available for Defence personnel to use on their home computers along with commercial variants.

Other VBS customers include the British Ministry of Defence, Singapore Armed Forces and NATO.

In January 2009, the United States Army deployed a new training program based on the VBS2 simulator engine to address training gaps identified in small unit operations in Iraq and Afghanistan.

Bohemia Interactive comprises a number of privately owned software development companies based in the US, Australia and the Czech Republic.

Prior to netting military simulation contracts, the group was chiefly known for producing action-themed video games such as Operation Flashpoint, a military shooter that provided the template for VBS2.