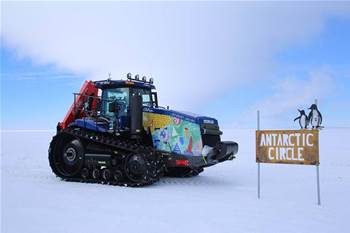 It's one way to beat the summer heat.

After a week of record-breaking temperatures across Australia, with more hot weather on the way in the next two months of summer, a job looking after the information tech down in Antarctica might begin to look pretty appealing.

The Australian Antarctic Division (AAD) is currently seeking applicants for a host of telecommunications positions on the southern continent, including an IT officer, communications technical officer, as well as comms riggers and operators.

IT officer jobs will be based out of Casey and Davis stations during the next summer season (so sadly you won’t be able to skip out on the next few months of heat or this year’s chaotic family Christmas celebrations).

The job entails delivering projects in conjunction with the AAD headquarters at Kingston, Tasmania and looking after the day-to-day running and maintenance of the stations.

Some IT officers will also be chosen to work on the tech aboard AAD’s ships.

IT officers also offer support to scientific programs being run by the likes of Geoscience Australia, and the Australian Radiation Protection and Nuclear Safety Agency, which runs a few infrasound monitoring stations in Antarctica to check that countries are sticking to the Nuclear-Test-Ban Treaty.

While there’s no mention of it in the job description, you might also have to go on a leisurely four-day trek across the ice to check on a single IoT (internet of things) weather station.

Applicants are expected to hold a ‘class C’ driver’s licence, even though there’s no road to the remote weather station (or cops to pull you over and check).

The job description does mention, however, that successful applicants might also have to take on additional, non-IT tasks like kitchen duties, garbage clearance, or snow clearance.

For all of their hard work, IT officers can expect to bring in a princely sum of $74,469 per annum while in Australia. Thankfully, that’s buoyed by additional allowances totalling $60,974 per annum while working in Antarctica, which brings it a bit closer to what IT workers could expect on the mainland.

It also helps that there’s not really a lot you can buy down at Antarctica, so saving shouldn’t really be an issue.

Workers can also expect a payout on their leave balance (20 days a year) when they finish with the program, given that taking a holiday when in Antarctica isn’t really allowed.

However, you can take a short virtual holiday to a more tropical setting if all the snow and ice gets a bit much.