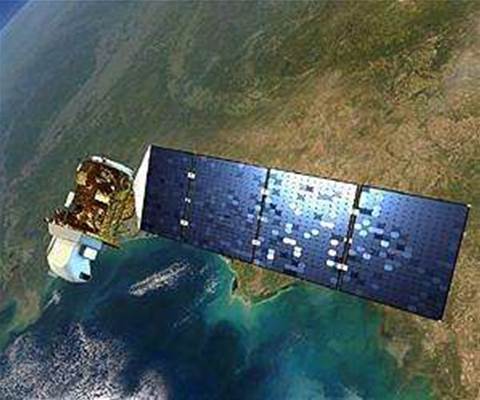 The satellite to be known as Landsat 8.

Geoscience Australia is providing communications support for the decommissioning of an Earth observation satellite that has been capturing image data for 25 years beyond its expected design life.

Landsat 5 is being shifted into a lower orbit "to slowly disintegrate the satellite through atmospheric burn-off," according to Geoscience Australia.

The satellite, which is jointly managed by the US Geological Survey and NASA, was launched in 1984 with a three-year design life.

It has been used far longer, orbiting Earth over 150,000 times and transmitting more than 2.5 million images of the planet's surface back to its owners and "co-operators" such as Geoscience Australia.

The head of Geoscience Australia's Earth observation group, Dr Adam Lewis, said that Australia would play a role in the decommission operation "by receiving and passing on communications to the US Geological Survey while the satellite is over the Australian continent".

"The information will advise on the exact location of the satellite and the status of its systems," Dr Lewis said.

Dr Lewis noted that Geoscience Australia had been "receiving and interpreting data from Landsat 5 since its inception, producing the satellite's first images of Australasia from the Australian Landsat Station in Alice Springs".

It has also contributed to environmental monitoring and emergency management applications, such as beaming back images of floods, cyclones and bushfire events, including Victoria's 2009 fires.

"Landsat 5 has been the most important piece of space infrastructure in monitoring the Australian landscape over the past three decades, and I think it's fitting that we play an important role, albeit a small one, in the decommissioning," he said.

Decommissioning of the satellite commenced on January 15 this year. It is the world's longest serving Earth orbiting satellite, according to Geoscience Australia.

A new satellite, codenamed Landsat Data Continuity Mission, is scheduled to launch next month to continue the Landsat project.

"It is poised to expand, improve and advance the long-term record of Earth's landscapes while maintaining the heritage of its Landsat predecessors," NASA said.

The new satellite is to be launched from a United Launch Alliance Atlas V rocket.

It will eventually be renamed as 'Landsat 8' once it is fully operational.