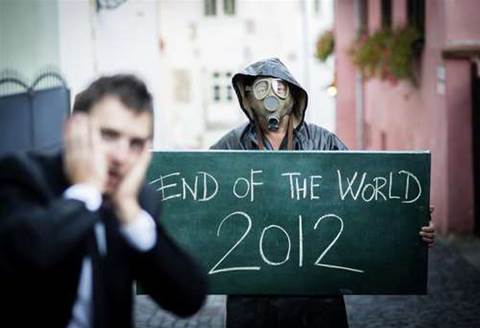 But don't worry... your servers should still boot.

Techs on standby for minor disruptions caused by interplanetary bingle.

Australia's telcos, network operators and web hosts are on a heightened state of alert, with tech teams on standby to respond to any service disruptions caused by the scheduled end of the world later today.

An investigation by iTnews can reveal significant investments made by several sizeable players to ensure the lights remain on in the event that the world switches off.

According to reports, side effects of the end of the Mayan calendar are anticipated at around 10.11pm AEDT.

Though at least one Australian professor has raised doubts about what exactly it might mean, many providers of IT systems aren't taking chances.

"Bulletproof has proactively upgraded all applicable firmware and has Infrastructure Team staff on call for the end of the world," Bulletproof Networks chief operating officer Lorenzo Modesto said.

"VentraIP Australia customers will be happy to know that we've recently spent some time wrapping all of our core infrastructure in the highest grade aluminium foil (none of this [no name] brand stuff), and asked the North Korean government to launch a new satellite known as VIP-1 to provide our customers with uninterrupted network service; however it appears that did not do so well," VentraIP CEO Cheyne Jonstone said.

Vocus CEO James Spenceley said the company had planned "for all eventualities".

"We've had a disaster recovery and business continuity plan for the end of the world for quite some time," he noted.

"We've done simulations on the end of the world and we were quite pleased that we received no customer complaints."

"If worst comes to worst, Bulletproof sees great opportunities to continue to win significant market share with our New Dawn DR [disaster recovery] service, which was announced in April this year," he said.

The service utilises "idle computing facilities inside ... orbiting satellites" and is able to detect "when a whole-of-Earth disaster has struck that would render most Earth-bound facilities inoperable".

"The ability of customers to deliver services seamlessly from the moon will also create huge opportunities for the remaining population, if applicable," Modesto said.

Back on Earth, Micron21 director James Braunegg said his firm had "timed the expansion of our facility to come online today which we believe could be the end of the world for some other players in the data centre space.

"We now have 600 percent additional rack space capacity and three times the amount of redundancy as our old facility, ready to handle any issue," he said.

"Our infrastructure has been upgraded across our entire facility from N+1 to a minimum of 2N on all power, cooling and network infrastructure.

"That being said as the clock ticks over our staff will be on-site, monitoring all services, ensuring business continues as normal and our NOC is ready to respond to any issue 24 hours a day."

Likewise, Jonstone said VentraIP had "just begun the initial deployment of our $1.5 million core infrastructure upgrade with new Dell cloud services and redundant power rails in to all of our racks, with any remaining single-corded devices now connected to new TrippLite Automatic Transfer Switches (ATS) to ensure power availability."

"Network infrastructure has also been bolstered with the addition of redundant fibre paths to our Sydney data centre and a link to join our new Las Vegas PoP to our Australian network," he said.

An Optus spokesman was far more nonchalant about the threat, pointing iTnews to a statement it made yesterday about an expected 78 percent year-on-year increase in "the peak load of mobile data" on its network in the week leading up to Christmas.

"Let's just say that we're predicting Christmas will come this year," he said.

iTnews plans to publish transcripts of all 'off-the-record' discussions with our sources over the past 12 years at 10:12pm AEST. You have nothing to fear.