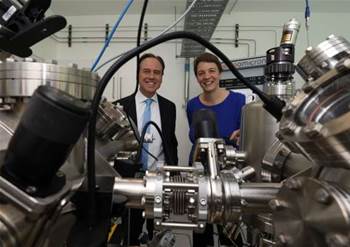 In April the Turnbull government pledged $25 million over five years to the Centre for Quantum Computing and Communication Technology (CQC2T).

Telstra and the Commonwealth Bank have also tipped in $10 million each to study the next generation of high-powered computing.

Researchers at the centre are hoping to successfully build a prototype quantum integrated circuit, which is the first step towards a working quantum computer.

UNSW yesterday backed the initiative with a further $25 million, bringing the confirmed tally up to $70 million.

However, the university expects “other partners to join the consortium to bring the founding investment to $100 million”.

The funding agreement secures the operation of the centre into future years. It has already been supported by the federal government for over a decade.

The Australian Research Council has recently extended its grants to the CQC2T as well.

Touring the facility yesterday, Industry and Innovation Minister Greg Hunt said the prototyping initative has the potential to produce “at least one Nobel laureate over the next 20 years”.

“San Francisco and the Bay area have Silicon Valley … we want to create Sydney as the Quantum Harbour for the 21st Century,” he said.

UNSW said that the CQC2T team are the only scientists in the world to have realised atomically precise devices in silicon.

The centre's leader, Professor Michelle Simmons, said the funding agreement is “a phenomenal opportunity for us to prototype potentially transformational quantum computing technology here in Australia, and be the first in the world to build 10 qubits [of quantum circuitry] in five years."