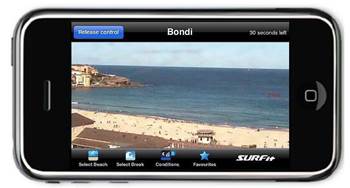 "It's one of the first apps in the world to have live streaming, controllable cameras [over 3G]. If you want to look at the surf at Bondi you can go to the app and the camera starts streaming," said Julian Warne, director of IDEAS Systems.

Other iPhone apps stream video but only when the user is connected to a wifi network, claimed Warne. Competing apps scale back to still images over 3G, he added.

IDEAS was looking for a way to reclaim market share in the "lifestyle content" market. It had begun by supplying telecommunications companies with video and news on sports like surfing, skiing, fishing and skating for their mobile phone customers.

These days IDEAS gives users direct access to content through its websites. Competitors had already developed streaming applications for the iPhone which could send video from fixed cameras.

IDEAS' Warne, met Pantha Corp's, Bjorn Schliebitz in Narrabeen, where both companies are based. Pantha said it could repurpose IDEAS' online content for the iPhone and developed its own player technology to control a camera remotely.

While there are already iPhone apps which can control cameras remotely using buttons, Pantha's interface pans and zooms the camera by pinching and swiping the iPhone's touch interface.

Each user has up to one minute to control the camera. People wanting to control a camera are put in a queue but can still see the streaming video while they wait.

Most find what they are looking for within 20 or 30 seconds, Warne said. "That's normally enough - it's very fast to zoom in on the surf break."

IDEAS' surf website, surfit.com, attracts 20,000 visitors a month with its free surf reports. It will sell subscriptions to access the remote cameras and the iPhone app will cost $2.40-$3.99 for an app. It is waiting to be approved by Apple before listing in Apple's Applications Store.

IDEAS plans to develop more iPhone apps for its other sites, skiit.com, fishit.com and skateit.com which follow skiing, fishing and skating respectively.

Warne turned to a local hosting and development company Bluefish to host the application and guarantee scalability. Bluefish migrated IDEAS servers to its own virtualised servers and tweaked the apps into a 64-bit IAS7 environment.

Pantha Corp, which has worked for News Digital Media and start-ups in Europe, has released other apps for the iPhone. Its most popular, Show the Loo, which finds toilets in your nearby area, has been downloaded more than 10,000 times.

The five year old company local team of developers is augmented by an Indian company when extra hands are required. Pantha and IDEAS are keen to bring the concept to other sectors such as security.