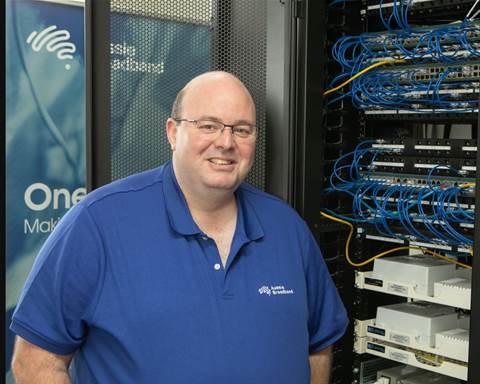 Aussie Broadband is hoping that a ‘white label’ arrangement launched last week could help the company offset the growing bandwidth demands of its own customer base, reducing some of its exposure to excess fees charged by NBN Co.

The ASX-listed retail service provider said last week that it would ‘white label’ both its connectivity and customer support services, which smaller retailers could brand as their own internet service offerings.

Aussie Broadband already has one “retailer” signed on - widely suspected to be an energy company - and more arrangements under negotiation.

What wasn’t clear initially, however, is the potential upside for Aussie Broadband in these arrangements, outside of providing a new channel to grow its residential broadband subscriber base.

During an earnings update on Thursday, managing director Phillip Britt said that “the main attraction for [Aussie Broadband] is that the customer profile of these connections is different to the Aussie customers.”

“What we’re expecting here is that the margins will be similar to what we see in Aussie customers today, and that’s driven largely by the fact that the usage profiles are different,” Britt said.

“The usage profiles of an Aussie customer tend to be at the top end of the market, they tend to be speed-focused customers, whereas the customers of this provider that we’ve brought on are probably more typical of your standard users.

“Ultimately, the usage profiles are a bit lower and so that complements our network nicely.”

iTnews confirmed on the call that the complementary aspect is partially intended to be a way of offsetting Aussie Broadband’s future NBN bandwidth needs for its own customers - a novel way of either limiting its exposure to NBN overage charges, or at least delaying its need to keep buying more bandwidth.

Britt said last month that Aussie Broadband’s customer base, which has a skew to higher-speed services, used considerably more internet capacity than the average NBN user.

Those customers’ needs also grew much faster than the industry average, upon which NBN Co bases a lot of its pricing decisions and justifications.

Britt has previously pointed to the widening gap between the amount of bandwidth that comes bundled with residential NBN plans, and the amount the users of those plans actually consume.

NBN Co’s answer to this over the past year has been somewhat perplexing, suggesting that RSPs sign up as many high-speed users as possible, since higher-speed plans come with more bundled bandwidth, which acts as a net benefit to the RSP.

This is based on the way CVC works: it is a pooled resource, meaning it must meet the collective bandwidth requirements of all of an RSP’s customers, and therefore it is up to the RSP how to balance that and to guess when they will need to buy extra.

The theory was dubious to begin with, and the real-world evidence increasingly suggests it does not stack up.

Were it true, Aussie Broadband would be considerably better off than other retailers, owing to its relatively large number of high-speed customers.

Instead, the RSP is looking for ways to “rebalance” its customer base, onboarding users from other providers that use less internet than a customer who signs on with Aussie Broadband directly, and therefore may be able to contribute some unused CVC capacity into the pool.

“That’s certainly what we’re hoping will be the case,” Britt said in response to a question by iTnews.

“CVC is obviously a pool so if it’s overused in one area and underused in another, then that works out beneficial for us.”

He added: “We see this as a key new channel for Aussie and a way of bringing on customers that doesn’t erode margin or value in what we’re doing, and complements our overall different channels to market."

Aussie Broadband is hoping to power the retail service offerings of only a small number of third-parties in this fashion, but wants each to bring a steady stream of sign-ons.

“We’re not expecting that there’ll be a significant number of [companies] that we bring onto the white label platform,” Britt said.

“It’s really being targeted for [companies] that are able to run at scale, so we do a small number of them but they bring a lot of volume.”

Companies that brought their retail broadband businesses to be run by Aussie Broadband would get the benefit of the RSP’s local customer support, which has been instrumental to its growth.

“It’s about providing the services and support that go around that.

“Ultimately the [first retailer] that signed onto this deal recognised our award winning customer service, and the reason they wanted to come onboard was they wanted to offer that experience to their customers.

“So that led us to develop this product in consultation with them. It’s something we’ve been working on since mid last year.”

It’s not clear to what extent Aussie Broadband might be able to offset its future CVC needs through the white labelling arrangement.

Britt has previously - and fairly recently - suggested the CVC construct should ultimately be scrapped; a view shared by most of NBN Co’s RSPs.