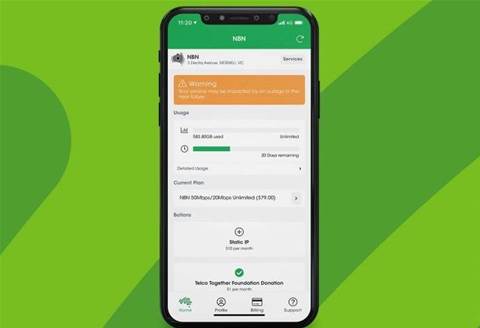 When most telco customers need more than a router reset to fix a connection problem, they usually have to ring up a call centre and go through the standard IT Crowd questionnaire before a technician reboots things on their end - Aussie Broadband’s app lets you do it yourself.

The MyAussie app, launched in March last year, is a major project for the internet provider flowing from its customer service strategy of delivering an “easy as possible,” “no bullsh*t” service.

One of the features that Aussie believes sets it apart from a typical telco app is the ability for customers to “kick” their own connection, restarting a service all the way through the network ran than just at a modem level on premises.

“It’s a much more thorough version of ‘turn it off and then on again,’” Aussie Broadband said.

It was built by Aussie Broadband’s in-house development team in just 45 days and has been used by over a quarter of the company’s active users since its launch.

Customers using the app can now:

• See immediately if there are any known outages affecting their service (soon to be fully converted to push notifications)
• See which NBN point of interconnect (POI) they are on, and check its daily CVC graph to see if Aussie Broadband is experiencing any congestion in their area
• Test their service at the touch of a button, including connection tests, connection kicks, line state tests, loopback tests and port resets, with a Plain English explanation of what each of these things do
• Check their service’s previous fault history and any speed tests attached to the account
• Apply a stability profile (often required by NBN before a fault can be lodged), something previously only able to be implemented by a staff member.

All of the tests run by customers are logged by the app to provide richer data for staff if the issue needs to be escalated.

It’s also helped attract more technically-focused customers, differentiating Aussie Broadband from other internet provider - a tidbit that started off as an anecdote but supported by the sheer volume in tests run by customers within the app.

Based on a reduction in time spent dealing with customer applications and issues alone, the app had paid for itself within three months.

It’s also given the company more breathing room when it comes to dealing with a significant growth in customers and the resulting need to rapidly grow its customer service staff.

This project is a finalist in the Mass-market category of the iTnews Benchmark Awards 2020.