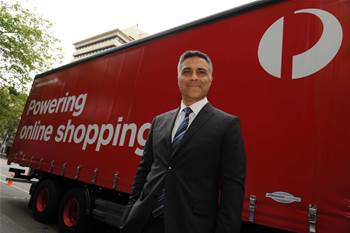 Australia Post’s chief executive officer Ahmed Fahour has labelled email as passé in the lead up to the full launch of its secure Digital MailBox service.

Digital MailBox was introduced late last March as part of a $2 billion effort to modernise in the face of falling mail revenue.

Fahour told iTnews today that Digital MailBox would open its doors to consumers in “coming months”.

He explained that the October launch was for an internal trial involving the government-owned company’s corporate clients and “hundreds” of employees, adding that the project was progressing as planned.

When asked to compare Digital MailBox with email at an Australia-Israel Chamber of Commerce luncheon today, Fahour said Australia Post believed that email was “on the way down”.

“I’m a keen observer of my own kids,” he said. “They don’t email at all; the way they’re communicating is in very short messages a la Twitter, WhatsApp, Facebook.

“You’re much better off in a secure online environment and email is not that. Email will have its purposes but I believe email is passé.”

Australia Post has been racing competitor Digital Post Australia for what Morgan Stanley analysts expect to be a $138 million market for secure, online mail.

Digital Post kicked off a public trial in November and initially planned to launch the service last month. The company did not respond to iTnews’ query on its status at the time of publishing.

Both services appear to target business-to-consumer rather than consumer-to-consumer mail, with Australia Post partnering with Telstra, Westpac and the Department of Human Services, and Digital Post founded by Computershare and Salmat’s business process outsourcing division.

An Australia Post spokesperson told iTnews last month that it was working with the individual organisations "to understand their requirements and internal systems before integrating them with the MailBox system".

“This [Digital MailBox] is effectively your letterbox, your filing cabinet and your payments card or bank account but seamlessly combined in a secure, online environment,” he said.

Fahour, a former National Australia Bank executive, denied that Australia Post planned to expand its banking services through Digital Mailbox, describing it as an extension of existing functionality.

He said Australia Post was a “vital piece of community infrastructure for all Australians”, while noting that its annual mail revenue had fallen $400 million since 2008, with a billion fewer letters sent last year.

On the flip side, growing parcel volumes from online stores had bolstered revenues, he said, describing the internet as “the mail business’s worst enemy but our parcel business’s best friend”.

“We know that if we don’t offer a digital alternative [to mail], our share of the broader communication market with completely extinguish,” he said of the Digital MailBox service.

“We are not in the letter business; we are in the communication business. We want to do so both physically and digitally,” he said.