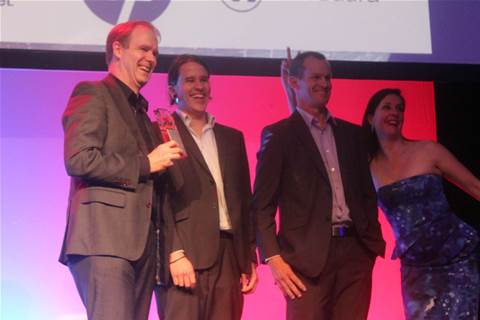 AusCERT-SC Awards go off with a bang

Star Wars fans were tickled pink during the lights and sounds of the AusCERT and SC Magazine Awards on the Gold Coast last night.

Conference attendees turned out in drove to meet and photograph a band of the film's characters from Vader's 501st Legion who patrolled the room, entertaining the crowd and, at one point, arrested Microsoft's security boffin and legionary Star Wars geek, Adam Shostack.

But the point of the night - and the source of excitement for many - came in the AusCERT and SC Magazine Awards handed out during the dinner.

AusCERT remembered to bring the trophies for its awards this year, relieving MC Corrine Grant was of the need to hand out stolen hotel merchandise to winners.

And AusCERT's Best Security Initiative went to the SCADA Community of Interest group, a veteran band of SCADA geeks who have made significant in-roads to bolster the profile of critical infrastructure security issues in Australia.

The winners of the SC Awards followed. Those winners and finalists were chosen only after months of rigorous judging.

This is awarded to the solution that best controlled who had access to information and provided logging, tracking and remediation in the event of misadventure.

This is awarded to the solution that protects small to mid-sized businesses from the threats they most likely face. It is awarded to that which best balances price with performance, is easy to use and is backed by affordable, reliable support.

This is awarded to the product, suite or service that did the most to keep its users’ online presences functioning against threats such as DDoS, zero-day vulnerabilities, insider threats and brute force attacks.

This award is presented to the project, individual or team that has changed the traditional practice of IT security.

This is awarded to the solution or provider that keeps data and applications safe and secure while travelling on networks, stored on removable media or “light OS” mobile devices.

The Product or Service of the Year:

This is presented to the organisation that through its products or services has:

The Vendor of the Year:

This award is presented to the organisation that has:

Nominations for the SC Awards 2013 open in September. There will be a series of tweaks to the awards format including the addition of an Australian-only category that's designed to identify emerging and established home-grown security.