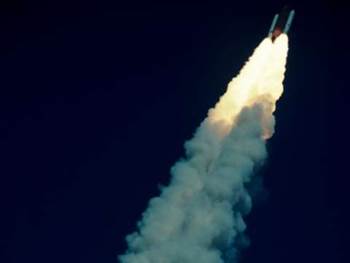 Astronauts are examining the underside of the space shuttle Endeavour after a chunk of the heat seal was knocked off during launch.

The shuttle is routinely checked now for damage after launch, a practice introduced after the Columbia shuttle burnt up on re-entry.

The check revealed that five nicks had been taken out of the heat shield of the shuttle: four of these have been deemed harmless, although Nasa is still holding fire on clearing the last.

"We have really prepared for exactly this case, since Columbia," John Shannon, chairman of the mission management team, told the International Herald Tribune.

Early signs are that the five inch hole is repairable, and encouragingly the damage is in one of the most sheltered places on the shield, near the right wheel bay. It was caused by a frozen chunk of packing around one of the boosts that came off during launch.

Every shuttle now has a repair kit on board so that the heat shield can be patched up while in orbit.
Got a news tip for our journalists? Share it with us anonymously here.
Copyright ©v3.co.uk
Tags:
astronautsdamageexaminehardwareshuttleto