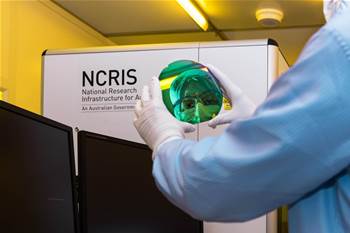 Inside the Sydney Nanoscience Hub.

Most experiments with quantum computers are conducted as close to absolute zero as possible to keep the quantum bits (qubits) stable enough to process information.

The ASX-listed company has for the last few years been conducting its research at of the $150 million Sydney Nanoscience Hub at the University of Sydney, a facility designed to enable collaboration between industry and academia in creating materials smaller than a human hair.

For a company like Archer, with a market capitalisation just shy of $30 million, access to the facility has been integral to transitioning from a materials extraction business (hence the ‘Exploration’ part of the name) into a materials technology company.

One of the machines in the lab used to deposit layers of carbon material on silicon wafers to build a processing chip costs over $2 million.

Archer is currently expanding into three domains: materials complex biosensing for human health, materials that can efficiently store and manage energy, and the development of a qubit processor chip - dubbed the 12CQ project.

Most other quantum research in Australia focuses on using silicon atoms or photons as the basis for the qubit, requiring systems with minimal noise in order to maintain their ‘quantum superposition’, or the ability for a signal to read as both on and off, which enables quantum computers to perform tasks exponentially faster than their traditional counterparts.

Archer uses a form of carbon - for which it conveniently owns three deposits of graphite through the exploration side of the business.

To actually perform an operation using a quantum bit processor, you need a material that has an electron spin lifetime of more than 100 nanoseconds, Archer chief executive Mohammad Choucair said.

“We have the only conducting material that’s able to show a lifetime spin of 175 nanoseconds.”

Choucair said silicon can have a lifetime spin between 100 and 1000x less than has been demonstrated in its carbon-based cubits.

“It’s just impractical. You can’t measure, you can’t read and write, the information is lost.”

“We are able to keep the information stable enough for a long enough period of time to be able to do those measurements.”

And while Archer’s qubits would perform better at lower temperatures, Choucair said that having materials that function in everyday devices and situations will be important for commercialising the technology and actually bringing it to users.

What’s more, the qubits will retain their spin lifetime even if heated to extreme temperatures (Choucair said around 1000 degrees), be breathed on or even “spat on” and still work.

The next stage for Archer is developing the rest of the chip in which the qubits will sit.

Choucair said the Sydney Nanoscience Hub has also helped the company through the development of the rest of the chip, with its 800m2 clean room and milllions of dollars of machines enabling Archer to rapidly design, manufacture and test different options.

Following that, Archer plans work on the scalability of its systems, which Choucair said should be sped up thanks to the robustness of its qubits.