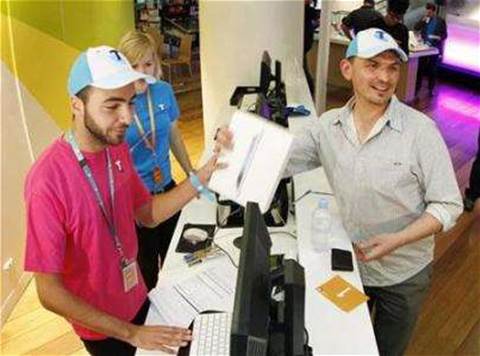 Queue numbers down but 'still solid'.

Apple's new iPad went on sale in Australia early today, greeted by a throng of fans hoping to get hold of a 4G-ready tablet computer that won good reviews despite stopping short of being called a major innovation.

Carrier Telstra stole a march on Apple, commencing sales at just two of its own stores at midnight.

Numbers were down compared with previous launches, though a still-solid turnout reflected demand for a new iPad version deemed a collection of incremental improvements.

Apple shares breached $US600 for the first time on Thursday on the Nasdaq, but gave up gains and dipped into the red in the afternoon. A single Apple share now costs more than the Wi-Fi-only iPad.

David Tarasenko, a 34-year-old construction manager who was the first to pick up the iPad, said ever since Apple Chief Executive Tim Cook revealed the tablet's third iteration, he couldn't wait to get one.

"When Tim Cook announced it, it sounded like such a magical tool. I just got hyped into it, I guess," he said.

The third-generation iPad from Apple - which sports a high-definition "retina" display and comes with a better camera - is capable of operating on high-speed 4G "LTE," or Long-Term Evolution network. But this version is not compatible with Telstra's 4G network in Australia.

The tablet houses a wireless chip from Broadcom and a Texas Instruments driver, components carried over from the previous iPad, according to teardown and repair outfit iFixit.

Influential reviewers Walt Mossberg and David Pogue raved about the iPad's new retina display. Mossberg said "using the new display is like getting a new eyeglasses prescription," while Pogue said it made text look "freakishly sharp."

Both Mossberg and Pogue noted that the new iPad had enough technical improvements to maintain its lead in the market.

"Apple hasn't totally revamped the iPad or added loads of new features," Mossberg said, "but it has improved it significantly, at the same price."

The new iPad is going on sale on Friday in 10 countries, including the United States, Canada, Singapore, France and Britain.

Elsewhere around the globe, diehards have begun lining up in front of Apple stores. Media pictures showed snaking lines already in place outside stores in Munich, Paris, London, Singapore and Hong Kong.

A sign outside an Apple store in Hong Kong discouraged fans from forming a queue, saying the store will not "serve on a first come first served basis" for the new iPad without elaborating, according to media reports.

"The (lack of 4G access) is not a game-breaker. They've upgraded the 3G technology, which I've tried and it's pretty snappy," said Cameron Ing, a data storage administrator.

Among those lined up outside Sydney's flagship Apple Store was Stephen Parkes, who was paid A$950 to wait in line for four days by the founder of an odd jobs website.

"I get a high waiting in the line and picking up one of the first products being retailed," said Ryan Han, a student at the University of New South Wales, who had also queued for hours.

Such is the demand for new Apple products that middlemen often pay strangers to buy the latest versions and transport them to markets scheduled for later releases.

A middle-aged Asian man outside the Apple store, flanked by two blue suitcases, said he was hoping to buy several new iPads, ideally more than 10. He declined to reveal his name, nationality or for whom he was buying the tablets.

Apple began accepting orders for the device on March 7, but wait times for shipping it are now two to three weeks in the United States.

Wall Street expects a strong start for the latest iPad and some analysts even expect sales of the current model to overtake the iPad 2.