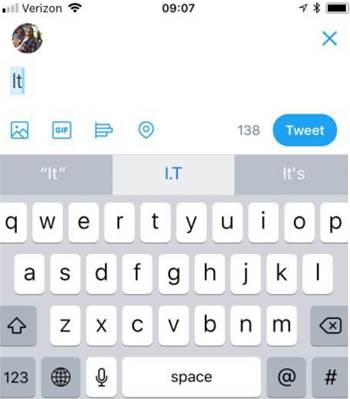 Users of Apple devices running iOS 11 are complaining of another text autocorrect bug this time changing the word "it" to "I.T".

Apple was earlier this month forced to issue a fix to iOS 11 to address a similar bug that autocorrected the letter "i" to "A[?]".

The sixth official update to the operating system - iOS 11.1.1 - came just a week after Apple released the first major update to iOS 11.

It had intended to address the issue in its next big update, iOS 11.2, but was forced to act faster as the problem began spreading to more users.

But iPhone users are now complaining that a second autocorrect bug is changing the word "it" to "I.T".

Reports have flooded in that when typing "it", the keyboad shows "I.T" as a QuickType suggestion, and then automatically changes "it" to "I.T" after a user presses the space bar - without tapping on the predictive suggestion.

Users have indicated the bug remains even after rebooting the device.

In some cases it appears using the 'text replacement' function in the keyboard settings to enter 'it' as both the phrase and shortcut works, but not in all instances.

Users can also completely turn off autocorrection and predictive suggestions in their keyboard settings.

It is unclear if Apple is planning to fix the bug in its next update. The company has been contacted for comment.