Apple says US founders would be 'appalled' by FBI iPhone request 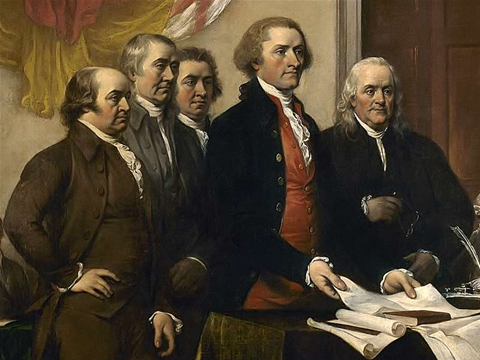 The US founding fathers

The US founding fathers "would be appalled" by a Department of Justice request to unlock an encrypted iPhone, Apple said today in its final brief before a court showdown next week.

Apple is fighting a court order obtained by the FBI last month which requires the company to write new software to disable passcode protection and allow access to the phone used by one of the San Bernardino, California shooters, Rizwan Farook.

Apple today argued US Congress had declined to give the Justice Department the authority to compel Apple's help.

"Although silence is sometimes a weak indicator of intent, it is a different story when Congress actively considers legislation to address a major policy issue, yet deliberately declines to enact it," Apple said.

According to Apple, the government also believes the courts can order private parties "to do virtually anything the Justice Department and FBI can dream up. The founders would be appalled."

In a statement, the Justice Department said it looked forward to responding to Apple's arguments in court.

"As we have said in our filings, the constitution and the three branches of the federal government should be entrusted to strike the balance between each citizen's right to privacy and all citizens' right to safety and justice," spokeswoman Emily Pierce said.

"The constitution and the laws of the United States do not vest that power in a single corporation."

Apple and the government have had several heated exchanges in court papers over the case in which law enforcement officials have said last December's shootings by Farook and his wife, Tashfeen Malik, were inspired by Islamist militants.

The FBI wants to read data on the phone to try and find out whether or not the couple had contacts with militant groups.

The government has claimed Apple is refusing access as part of a "marketing strategy" to show off its commitment to customer privacy.

"Of those advertisements, not a single one has ever advertised or promoted the ability of Apple's software to block law enforcement requests for access to the contents of Apple devices," Ferrini said.

Repeating some of the arguments from its previous court filings, Apple today said the court order violated free speech rights by compelling it to create software, and contradicted the purpose of a 1994 law called CALEA, which regulates government surveillance of communications networks.

The government has asked Apple to create a new version of its operating system, which would circumvent a feature that erases data on an iPhone after too many incorrect passwords are entered.

In a court filing last week the government suggested it could also have the authority to seek Apple's source code and signing key. If the government did obtain that code, experts said it could access an unlimited number of devices, not just Farook's phone.

In response, Apple said "the catastrophic security implications of that threat only highlight the government's fundamental misunderstanding or reckless disregard of the technology at issue and the security risks implicated by its suggestion".

Additionally, Apple senior vice president of software engineering Craig Federighi said the company has never provided any government with its proprietary source code, according to a sworn statement filed in court.

Farook and Malik shot and killed 14 people on Dec. 2 at a holiday party. The couple later died in a shootout with police.