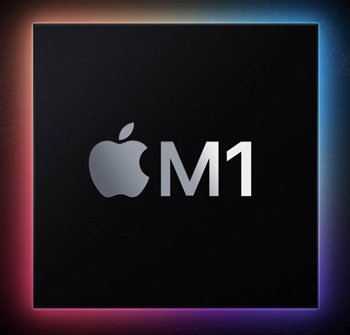 Apple's transition away from Intel processors to its in-house designed ARM chips used in its iPhones and iPads has started in earnest, with three new Macs going on sale next week equipped with the system-on-chip named M1.

The company's best-seller laptop, the MacBook Air, starts at A$1599 for a system configured with the eight-core M1 chip and 7-core graphics processing unit, 256GB of storage and 8GB of RAM in a fanless case.

Paying A$1949 buys another M1 graphics core for the full eight on the chip, 512GB of storage and 8GB of RAM.

Both laptops have two Thunderbolt 3/USB-4 ports, and can be equipped with a maximum of 16GB RAM and 2TB of storage.

Apple claims between 15 to 18 hours battery life depending on usage scenario from the MacBook Air, thanks to the M1 being more energy efficient than the Intel chips used in earlier models.

A model with 512GB of storage is also available at A$2299, and both laptops have 13-inch Retina displays and two Thunderbolt 3/USB-4 ports.

Apple also released a Mac Mini desktop based on the same M1 system-on-chip as in the new MacBooks, starting at A$1099 for 256GB storage and 8GB RAM.

Compared to its Intel-based products, Apple claims the M1, with 16 billion transistors, offers between 2.5 to 3.9 times the performance using applications like Final Cut Pro and the Xcode integrated development environment.

The integrated eight-core GPU in the M1 is said to be up to five times as fast as the circuitry in the current Intel processors and, like its mobile devices, the 16-core neural engine in the chip can perform up to 11 trillion operations per second.

Apple's macOS 11 "Big Sur" operating system has been updated to run on the new hardware.

Until the transition to Apple silicon is complete, developers can ship a single, Universal App binary for their programs that will run on both M1 and Intel-based Macs.

The company has also included the Rosetta 2 translator for x86-64 apps, claiming that some apps written for Intel run faster on that thanks to the performance improvements the M1 brings.