Apple has been granted a patent for a portable fuel cell that could be used to power mobile devices for days rather than hours.

The United States patent number 8,980,491 granted to Apple today reports a "design of a portable and cost-effective fuel cell system for a portable computing device."

Fuel cells first appeared in the early part of the 1800s and are currently under intensive development as energy sources for vehicles and other applications.

Unlike batteries, fuel cells do not store electric energy. Instead, they convert chemical energy to electricity through oxidisation of hydrogen or hydrocarbon sources. 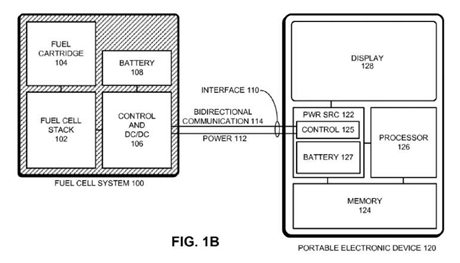 Apple's fuel cell design is external from the device, according to the patent, with a MagSafe 2 or alternate connector with bi-directional communications capability to control the power source.

A fuel cell could provide power for devices for days and weeks instead of hours on end, but it wouldn't spell the end of batteries. Apple envisages the fuel cell would be used to charge a battery inside the external unit.

It is not known at this stage if Apple will be able to successfully build a commercial fuel cell power supply.

The company has recently invested heavily in longer-lasting energy supply research, and unveiled the first terraced battery in the world for its new, lightweight MacBook this month.