Apple has launched a new mobile payment feature for its Australian retail stores that allows customers to purchase select items through mobile payments.

The EasyPay feature, available within the Apple Store iOS app from Thursday, allows customers to bypass the usual checkout process by scanning product barcodes on off-the-shelf items and paying for it with a credit card already associated with the user's iTunes account.

Users can then walk out of the store with the item without having to approach a salesperson. A PDF receipt is emailed to the customer.

First launched in the US in late 2011, the service has since been rolled out to Apple's self-branded retail stores in a handful of other regions, including the UK.

A spokesman for Apple Australia confirmed the feature would be available in local stores from today.

The EasyPay service can only be used to buy Apple accessories and other small-ticket items. Hardware purchases still require staff assistance. This restriction was also present in the overseas version.

The company has traditionally been wary of mobile payment models, with current smartphone models lacking the near-field communications (NFC) technology seen as a pre-requisite to development of "mobile wallets".

According to recent reports, Apple has deliberately held off from implementing such technology until key concerns around technical compatibility and financial models are sorted out.

Despite this, major Australian banks including the Commonwealth Bank have repeatedly pointed to technology companies like Apple, Google and Facebook as a potential future threat to financial industries as they assume responsibility for the financial relationship with the customer.

Commonwealth Bank has developed its own near-field-based mobile payment system for the iPhone. 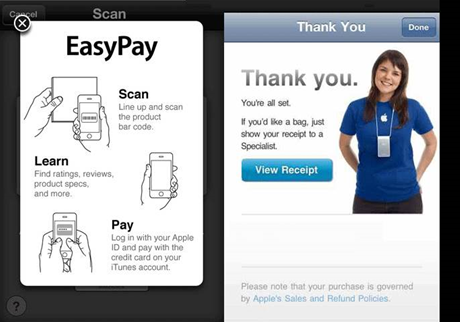