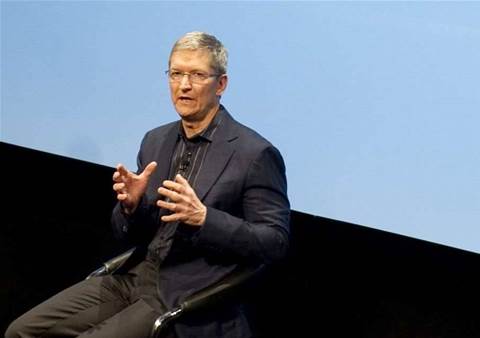 As expected, chief executive Tim Cook announced two new top-of-the-line MacBook Pro notebooks. Both come with 15in high resolution IPS displays at a resolution of 2,880x1,880 pixels. At 220 pixels per inch, Apple claims it is the highest pixel density of any readily available portable computer.

The notebooks also come with an Intel 2.3GHz Ivy Bridge quad-core processor, 8GB of memory and a 256GB Flash drive, as well as graphics built into the CPU coupled with a separate NVIDIA GeForce GT 650M adapter

The models' thin form factor comes at the cost of an internal CD or DVD drive, which users must now buy separately.

Tthe cheapest new MacBook Pro is priced at $US2,199 for US residents; Australians however will pay more slightly more at $2,499.

Apple has removed the previous 17-inch screen model from the product range.

It did, however, update its high-end desktop Mac Pro line for the first time in several years, despite fears from power users that Apple was planning to ditch the product line completely.

Conspicuously missing from the list of anticipated announcements was an Apple-branded TV and a software development kit for the existing Apple TV set-top box device.

Mac OS X will receive an update to cope with high resolution screens on the Macbooks, but the updated “Mountain Lion” version of the operating system won’t ship until next month.

A preview version of Mountain Lion has already been released to developers, and the compamy expects high adoption among an installed user base of 66 million Macs.

Apple’s mobile operating system will also be refreshed as iOS 6 in August this year.

A demo of the software at the conference focused on the new Maps application, which replaces the Google-made application available previously, and tigher integration with social media networks, including Facebook.

Siri, Apple’s voice recognition software, will make it to the new iPad and is also receiving further improvements for sports and restaurants. How well these will work outside the US remains to be seen, however.

iOS software chief Scott Forstall told the conference that Apple had sold 365 million iOS devices to date, with 80 percent of these using iOS 5. The company counted some 140 million iMessage SMS replacement users sending, on average, about a billion messages a day.

Cook also had some impressive figures to rattle off, including 30 billion apps downloaded from Apple’s App Store, earning developers $US5 billion. The App Store now contains 650,000 apps, with a third of these being developed for iPads.

While media and developers in the WWDC audience were impressed with the announcements, shares in Apple were down 1.58 percent at time of writing.