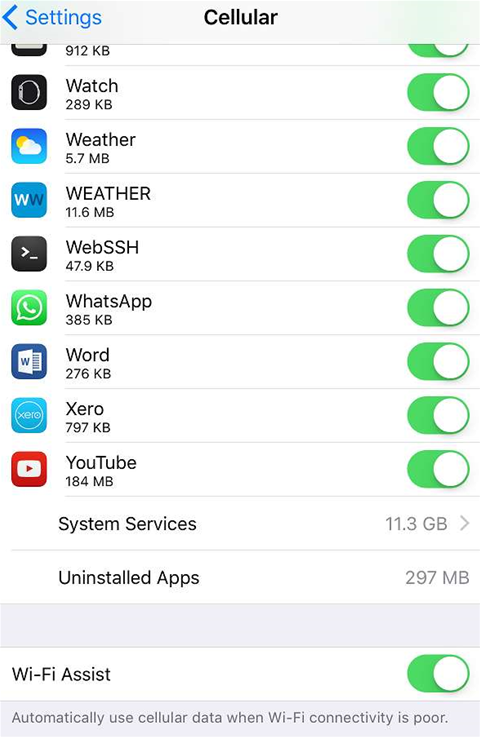 Wi-Fi Assist not all that helpful to those with limits.

Apple customers who have upgraded to the company's iOS 9 mobile operating system are complaining that a new featured intended to ensure a smooth web browsing experience is eating up their data.

iOS 9 debuted earlier this month with a number of new features including Wi-Fi Assist. The feature is aimed at ensuring users don't experience slow web browsing when their wi-fi connection is flaky.

When the connected wi-fi network is struggling, Wi-Fi Assist automatically moves the user onto their mobile network provider. The feature is turned on by default.

Apple has not previously included such a feature by default, and users who assumed their device was running off wi-fi have complained of unusually high data usage.

"I usually use 1-2GB of mobile data a month, this month I’m up to 7. I suspect iOS 9 wifi assist, anybody else?" Jim Ray said on Twitter.

The feature can be turned off by selecting 'mobile data' in the settings application and opting not to use Wi-Fi Assist.

The rival Android operating system also offers a similar feature dependent on device, but it is not turned on by default.

The code requires telcos provide tools to help consumers to monitor their usage, which included notifications within 48 hours of when users had reached 50 percent, 85 percent and 100 percent of their data limits.

Telco industry body AMTA recently attributed the revised TCP to a 22 percent drop in the number of Australians suffering bill shock in the last two years.