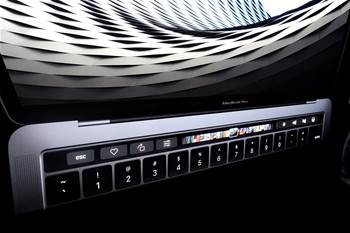 While Touch ID comes to Mac.

Apple has unveiled a much-awaited refreshed MacBook Pro laptop range which have lost the physical function keys in favour of a software-driven "touch bar".

Only one of the three new laptops Apple showed off today retain physical function keys. The two pricier MacBook Pros do, however, contain a physical “fn” button on the keyboard which summon the function keys on the Touch Bar.

The Touch Bar is not available in the lowest-priced 13-inch MacBook Pro (starts at A$2199).

Current applications that use F keys will work with those in the Touch Bar. However, developers need to add support for the Touch Bar and customise it for their applications if they wish to provide context-sensitive features for users.

The 13in entry-level MacBook Pro - which lacks the Touch Bar and Touch ID - comes with a two-core 2GHz Intel Core i5 “Skylake” processor that can burst up to 3.1GHz, 8GB of memory, and 256GB of solid state storage with 3.1 gigabytes per second throughput.

The laptop is 14.9mm thin, and weighs 1.37 kg, encased in a machined aluminium body.

The pricier 13-inch Touch Bar and Touch ID-equipped MacBook Pro costs $2699 for a 2.9GHz Intel Core i5 processor, 8GB RAM and 256GB storage. Four 40Gbps Thunderbolt 3 are included with the mid-range system, up from two on the entry level MacBook Pro.

The 15-inch model also gets AMD Radeon Pro discrete graphics card options, with up to 4GB video RAM, whereas the smaller MacBook Pros rely on the Intel Iris 540 graphics chipset built into the processors.

Battery life is quoted by Apple as up to 10 hours for both the 13 and the 15-inch MacBook Pros.

The entry-level MacBook Pro is available immediately for Australian buyers. Apple said the more expensive models can be ordered now for delivery in two to three weeks.