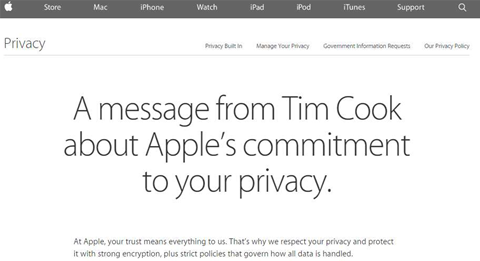 Apple today published a new privacy policy and defence of its security and protection efforts, claiming it has built a technical barrier in iOS 8 to remove its ability to hand over user data to law enforcement agencies.

In a move aimed at trumping the transparency efforts of other technology giants like Google and Facebook, and also at delivering transparency following the recent large-scale iCloud hack, Apple today introduced a new section on its website detailing its approach to user privacy and security.

The effort is especially timely given the imminent release of Apple's new Apple Pay payments product as well as its health-tracking service HealthKit, which will store the personal health information of users in the company's iCloud service.

As part of the new iOS 8 operating system, which was released today, Apple has introduced expanded data protection to its embedded applications.

The feature covers data contained within the calendar, contacts, reminders, notes and messages applications, which are now protected by a passcode until after the device is unlocked following a reboot.

Mail and third-party apps previously had the same security protection.

It means personal data contained within those apps is protected by a user's passcode, which Apple is unable to bypass.

"Apple cannot bypass your passcode and therefore cannot access this data. So it’s not technically feasible for us to respond to government warrants for the extraction of this data from devices in their possession running iOS 8," the company stated on its privacy page today.

Apple previously kept the encryption keys that were able to unlock devices for law enforcement requests but will no longer do so.

In a message to users, Apple CEO Tim Cook said he wanted to make it "absolutely clear" that Apple had "never worked with any government agency from any country to create a backdoor in any of our products or services".

"We have also never allowed access to our servers. And we never will."

Apple also emphasised its focus on selling products over creating user profiles to sell to advertisers.

Cook said the company's business model was to "sell great products" rather than "monetise the information you store on your iPhone or in iCloud".

He took a direct stab at Google's advertising model when telling customers Apple does not "read your emails or your messages to get information to market to you".

"Our software and services are designed to make our devices better. Plain and simple," he said.

Apple said it had published the new policy and privacy information to give customers more transparency about how their personal information is handled, and said it would update the website at least once a year or whenever significant changes occur.

The policy also attempts to remove the company from the controversy surrounding the spying programs conducted by the US National Security Agency, which have seen technology companies go public on their efforts to protect users against invasions of privacy.

"At Apple, your trust means everything to us. That’s why we respect your privacy and protect it with strong encryption, plus strict policies that govern how all data is handled," the company stated on its website.

"Our commitment to protecting your privacy comes from a deep respect for our customers. We know that your trust doesn’t come easy. That’s why we have and always will work as hard as we can to earn and keep it."