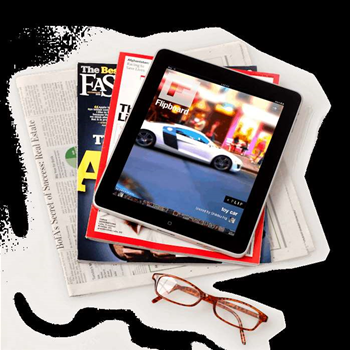 Flipboard has issued an update to its much-hyped social media magazine app for the iPad, only two days after first release hit the mainstream press.

"A new version of Flipboard (ver 1.0.1) is now available on the App Store," Flipboard chief Mike McCue said in a blog post today.

Flipboard was forced to submit version 1.0.1 to Apple after users found that they were unable to sign in to third party services such as Twitter and Facebook to pull information from their social media feeds into the app.

Flipboard's original sign-up process, which allowed users to sign-in on a first-come-first-served basis, failed as users rushed to try out the application.

McCue said that around half of the users attempting to connect have received a message stating that Flipboard is "over capacity" and that they should attempt to sign in at a later date.

The new version attempts to queue users in an orderly fashion before signing in to these services. It asks users to submit an email address, which the company will use to inform users when their sign-up is ready to be processed.

"This version enables people to reserve a setup slot and to enter their email address so that we can notify them once their slot has opened up," explained McCue.

"When you receive the 'all clear' email from us, open Flipboard, and you will be able to add your Twitter and Facebook sections," Troy Bryant, one of Flipboard's iPad engineers explained to members of Get Satisfaction, a social media customer feedback forum.

Although 1.0.1 was completed yesterday, Flipboard couldn't release the fix until it got Apple's approval today.

Flipboard has not revealed how many of Apple's 3.3 million iPad users have downloaded the application, but since the app's release the company has already collected over 10,500 followers on Twitter.

The overload has sparked calls for Flipboard to charge $1 to reduce demand or use a cloud computing service to meet processing capacity.