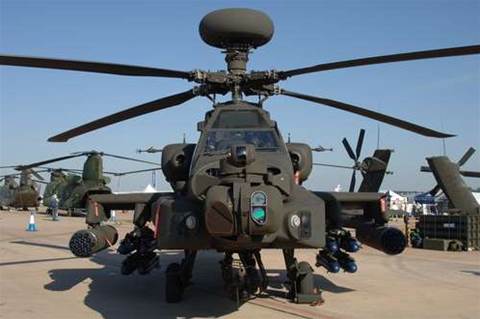 Update: The US Army has warned snap-happy soldiers of the dangers of geo-tagging photos after such information was used by enemies to locate and destroy four Apache helicopters.

The 2007 incident was recounted by US Army Maneuver Center of Excellence (MCoE) intelligence officer Steve Warren in a statement warning.

“A new fleet of helicopters arrived with an aviation unit at a base in Iraq [and] some soldiers took pictures on the flightline … from the photos that were uploaded to the internet, the enemy was able to determine the exact location of the helicopters inside the compound and conduct a mortar attack, destroying four of the AH-64 Apaches,” Warren said.
“A deployed service member's situational awareness includes the world of social media. If a soldier uploads a photo taken on his or her smartphone to Facebook, they could broadcast the exact location of their unit.
Longitude and latitude coordinates in geotagged photos were sufficiently accurate to compromise solider positions, he said.
Geotagged photos were also trackable on services like Flickr.
Online and social media division Staff Sergeant Dale Sweetnam said Facebook's timeline exacerbated the problem because it places photos taken by users on a map.
"Some of those individuals have hundreds of 'friends' they may never have actually met in person, Sweetnam said.
"Honestly, it's pretty scary how much an acquaintance that becomes a Facebook 'friend' can find out about your routines and habits if you're always tagging location to your posts."
The Army said unclassified information, when strung together over time, can create patterns of sensitive data sets.
"In operations security, we talk about the adversary," McoE operational security officer Kent Grosshans said.
"The adversary could be a hacker, could be terrorists, could be criminals; someone who has an intent to cause harm. The adversary picks up on pieces of information to put the whole puzzle together."
"Be conscious of what information you're putting out there," he said. "Don't share information with strangers. Once it's out there, it's out there. There's no pulling it back."
Got a news tip for our journalists? Share it with us anonymously here.