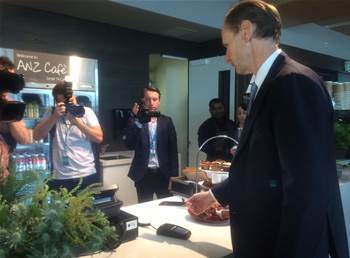 Partnership is about brand, not economics.

ANZ Bank has described the interchange fee deal it has brokered with Apple as "fair" after many months of negotiations for the Apple Pay payments platform.

ANZ today claimed the status of the first major bank in Australia to offer Apple contactless payments to its customers.

But the bank remained tight-lipped about the cut of interchange fees Apple has demanded in return. A difference in opinion over how much Apple should charge has been behind the delay of Apple Pay, which launched in 2014, becoming available through Australia's banks.

In Australia, banks charge roughly $0.83 for every $100 worth of transactions they process for the major credit card providers.

It is understood Apple was demanding around $0.15 of the $0.83 - the same as it charges in the US - which the banks baulked at as being too high.

While declining to detail the pair's commercial arrangement, ANZ Bank CEO Shayne Elliot told iTnews the deal his bank had brokered with Apple was "a fair outcome and we are happy with it”.

“It’s fair in terms of the pie that is available in terms of relative value. And it is fair because we can look around and see what other similar transactions have been globally. We are totally comfortable with it," he said.

The ANZ boss argued the Apple Pay partnership was more about branding and customer experience than economics, claiming the interchange slice was "not going to change the dial at Apple or at ANZ”.

He described his negotiations with Apple in the lead up to today’s announcement as “robust”.

Elliot said he hoped the offer would result in “thousands” of iPhone users switching to ANZ to use the platform.

“People love Apple. And those people will now have an incentive to come to ANZ,” he said.

The bank claims the customer reaction to Apple Pay, which is available for use from today, has already been overwhelming.

All of ANZ’s 5 million banking customers can sign up if they use an iPhone 6 or newer Apple smartphone, iPad Air 2, mini 3 and iPad Pros, and Apple Watch.