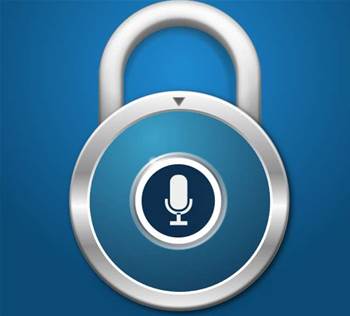 ANZ Bank has offered investors a sneak peak of the revamped mobile applications it has been building atop a new multi-channel SAP platform.

The mobile apps, promised as part of a $1.5 billion 'Banking on Australia' technology overhaul announced one year ago, are not quite ready for production, but ANZ execs promised they will be within the first calendar quarter of 2014. 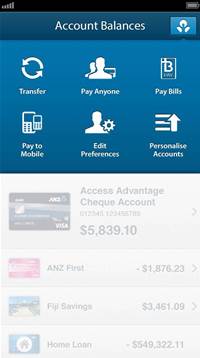 The bank's three-year old GoMoney banking mobile app — which now has well over one million active users processing over $3 billion of transactions a month — and its more recent FastPay app for accepting mobile payments — used by 7000 small businesses — will both be re-released with new navigation and personalisation options.

A revamped ANZ online banking site will be released later in 2014 or in 2015, also on the SAP platform.

From there, future applications and features will be able to be rolled out across multiple devices (PCs, smartphones and tablets) at greater speed, said Pam Rebecca, general manager of digital at ANZ.

"At the moment, everything we do we have to effectively do twice," she said, as the bank runs different platforms for online banking and mobile channels.

"One of the benefits of the new platform is that we'll be able to make a change once and push them across all of our channels."

Beyond a new user interface, there were no features in the prototype app that advance on the experience customers enjoy with GoMoney and FastPay today.

Rebecca said social payments is on the agenda, but not an immediate priority. The bank's more immediate concerns is to build in an ability for consumers to report lost or stolen credit cards via GoMoney — a feature that will most probably be live for the re-launch.

The bank did, however, showcase several initiatives its product development teams have been working on that are likely to be incorporated into future releases. The most compelling among them are security checks.

ANZ has been experimenting with voice biometrics as a future means of two-factor authentication for complex transactions.

Today, customers of several Australian banks can opt to be sent an SMS verification code when attempting to send payments to unfamiliar or unlinked bank accounts as a means of preventing fraud.

But as an SC Magazine investigation discovered, these SMS verification messages can be intercepted — forcing the Communications Alliance to declare SMS authentication unsafe for online banking.

ANZ Bank has been trialling the use of voice biometrics as a means of authenticating a customer in its call centre and Sam Jackel, ANZ head of technology for assisted channels, yesterday demonstrated how it might be used to secure mobile transactions.

At present, a customer requires a PIN number to send money using GoMoney — but only up to a $1000 threshold, beyond which a second factor of authentication is required to mitigate fraud.

Jackel demonstrated a working prototype application that used Nuance voice biometrics — one of several technologies the bank has trialled. Customers can hold down a button and speak a simple sentence such as "At ANZ Bank, my voice is my password" — after which the system verifies that this "voice print" matches the voice recorded when a customer set up the feature. 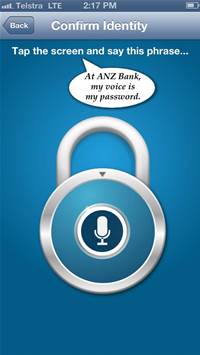 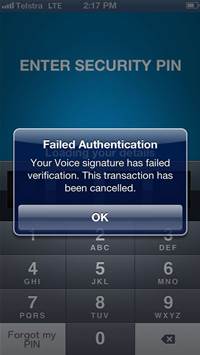 If the two recordings match, the payment is released. If not, the customer is passed through to assisted channels, such as a call centre.

"It's a quick, simple and safe experience from a customer's perspective," Jackel said, who proved its effectiveness by asking a stranger to come forward and attempt to mimic his voice. The transaction failed.

"If we've already got a voice biometrics database set-up, we can use this technology across multiple channels — the call centre, apps — and that has a huge productivity benefit for us," said Philip Chronican, CEO of ANZ Bank in Australia.

"At the moment if you call a call centre and need to identify yourself and don't easily have all the information required, it can become a long and torturous process. One of the things we like about voice biometrics is its portability across channels."

Chronican said he would expect voice biometrics to be used by the call centre first, and in future releases of GoMoney further down the track.

ANZ — like Westpac — has focused on revamping its presentation layer (online and mobile channels) at the expense of overhauling its legacy back-end.

Every time a customer makes a transaction or an ANZ staff member fills out an "A-Z review" of a customer on an online or mobile app, it is amended or "attached" to ANZ's core banking and CRM systems, such that no data will be stored on the new SAP presentation layer.

Chronican said that while the 2010 launch of the GoMoney app was well ahead of its time, mobile banking is now "so mainstream, we have to reengineer our business around digital and mobile".

"We'll be putting more and more through these channels, as customers are saying that's how they want to do business with us," he said.

ANZ is thus spending a far smaller percentage of its $1.5 billion 'Banking on Australia' spend on technology transformation compared to its peers.

"Our digital spend is north of $150 million to date, and we'll continue to spend more than $50 million or $100 million each year for some years yet," Chronican said. "We're spending $300 million a year on our change agenda, so in round numbers digital will be around a third of that spend."

Most of the services work for the SAP overhaul has been done by SAP engineers and staff at outsourced IT services partner IBM.

The bank has now trained some of its staff in Asia to work on the platform in the longer term.