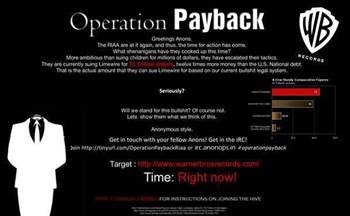 The Anonymous hacktivist collective temporarily took down the website of Warner Bros Records with a distributed denial of service attack yesterday.

According to unconfirmed reports, the group was also attempting to download Warner Bros emails and archived material.

Anonymous launched the attack to protest against Warner Bros' involvement in a US$75 trillion lawsuit against file sharing company Limewire.

Thirteen other recording studios were involved in the lawsuit for a sum more than five times the GDP of the United States.

Earlier this month, Anonymous called for DDoS attacks on the New Zealand Government’s Department of Internal Affairs website to protest against a voluntary internet filtering scheme that most major ISPs have now joined.

The hacktivists have also hit government websites in Tunisia, Zimbabwe, Egypt, Yemen and Italy, as well as corporate sites, like those of Visa and Mastercard after they refused to process payments for Wikileaks.

Anonymous issued the following statement to explain its attack:

“Limewire has been sued for 75 TRILLION Dollars by 13 record companies. Every single US household would have to spend all of its income buying nothing but music for over 13 years in order to arrive at what the music industry has deemed a reasonable settlement.

To put that number into perspective the U.S. GDP is around $14 trillion -- less than one fifth of what the music industry is requesting.

Even the lower figure of $400 billion still amounts to seven percent of total household income in the entire country.

The idea that the industry could ask for trillions in damages apparently springs from a previous success against Usenet in 2009, in which copying of a relatively small number of works (878) was multiplied by the maximum penalty to arrive at a damages bill close to US$6.6 million.

However, in this case – which involves a large number of infringers – the judge has said “allowing Plaintiffs to recover multiple awards per work based on the number of direct infringers is untenable”.

These are the plaintiffs, and our targets: