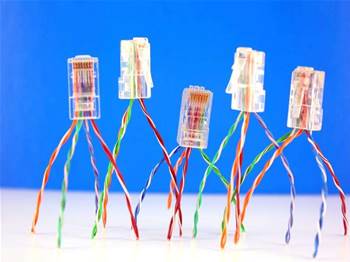 Buying a nice address on the Internet will soon cost a bomb.

The number of addresses available under IPv4, the predominate protocol for routing requests between hosts on today's internet, is dwindling rapidly.

As of publication, there are 14 IPv4 /8 blocks remaining to allocate, each with approximately 16.7 million addresses. This equates to a total of 217 million.

That might sound like plenty, but estimates point to the remaining IPv4 address pools being depleted around June 2011, a faster pace of exhaustion than was previously anticipated.

When the world is down to just five /8 blocks left, each of five Regional Internet Registries (RIRs) will allocate one last lot of addresses according to their respective policies. One thing's for sure: the IPv4 addresses left to allocate won't be cheap to obtain.

Geoff Huston, Chief Scientist at APNIC, the registry for our part of the world says "the trading price of IPv4 address will skyrocket" until IPv6 - its successor -takes over.

There is nearly an endless demand for network addresses at present. According to Huston, the mobile market - which sells up to 150 million new services a year - has become a major consumer of IPv4 addresses. China is also progressively deploying mobile and wireless services on a large scale, and will feel the address crunch with immediacy.

In other words, Senator Conroy's famous NBN dishwasher isn't likely to be allocated an IPv4 address under these circumstances. It could however get an IPv6 address quite readily, as the new protocol has close to an inexhaustible amount to allocate from.

The question is - with plenty of publicity around the upcoming IPv4 address exhaustion over the past few years, why haven't we shifted to IPv6 already?

Huston says "the reason why this industry wants to play chicken with address exhaustion lies fundamentally in the make-up of the deregulated business environment and the inability of the market to adequately encompass transition models into business plans."

There is some hope that we'll avoid address exhaustion disaster. Presently, Huston estimates some six per cent of Internet end-users could reach an IPv6-only site. This is "a lot" he says, and up from the 0.1 to 0.2 per cent figure that remained static for many years.

"If it really was one in a thousand, then it would be case of 'abandon all hope'," Huston says.

APNIC is "doing all it can" with the four other RIRs, Huston says. Existing IPv4 address space holders can obtain the equivalent amount of IPv6 space at no additional cost. The IPv6 space can be allocated with a single click in fact, thanks to APNIC's Kickstart program, Huston says.

One potential remedy is Network Address Translation or NAT, but experts aren't convinced this is the answer.

TCP/IP and UDP, the two protocols most commonly used for Internet data communications have 65,536 ports for each IP address. Martin explains that once users' computers and devices are behind NAT, they have to share the ports.

"Research these days shows that even the average user can chew through 1,000 ports without even thinking or knowing about it," Martin says.

Applications such as Google Maps, for instance, open up one port and TCP/IP session for each map tile. If a network session cannot open ports for data traffic, it will eventually time out.

Large-scale NATs threaten the end-to-end connectivity principle that has made today's Internet applications and the services offered over it possible, Martin says.

Martin also says the need to shift to IPv6 is now "really urgent, only because there should've been a gradual migration to it starting over ten years ago."

What's holding the migration back then?

Apart from the market failing to encompass transition models into business plans as Huston says, at the infrastructure level network equipment and providers often aren't ready for the new protocol.

Internode operates a global network that has been dual-stack - both IPv4 and IPv6 - since 2007 and is running a trial for customers on ADSL and other broadband types where they can opt in and go onto the new network protocol, says Matthew Moyle-Croft, peering manager and team lead at the Adelaide Internet provider.

However, uptake has been modest, Moyle-Croft says, due to the lack of customer premises equipment (CPE) that supports IPv6. Presently, a few hundred Internode customers are on the IPv6 trial.

"CPE has been a problem, but more vendors are working on rectifying this," Moyle-Croft says. "We now have two vendors about to release CPE and code for IPv6 that they've developed for our trial," he adds.

"Our trial was critical for them to be able to develop the code - got to stop that chicken and egg problem," Moyle-Croft says.

"You'd be surprised how many ISPs and other service providers still barely understand IPV6," Stevens says.

It' a massive problem, Stevens says, as it will take a year for an ISP to go from zero to full product support for IPv6.

"They have to skill up, audit what they have, buy new equipment, licenses and more and then integrate it into Operational Support Systems and then, turn it into products," he says.

Then there's the equipment currently being used.

"While some networks technically can play with IPv6, much of their kit from before 2005 and in some cases even later has problems handling the day-to-day use of IPv6," Stevens says.

Even the two most popular Cisco switches in use in small to medium-sized ISPs - the Cisco 3560G/3750G - have Ternary Content Addressable Memory (TCAM) limit issues that "create significant problems for holding IPv6 routing tables," says Stevens.

Stevens says the only answer is "bigger and newer equipment".

And that is "going to cost reasonable money."