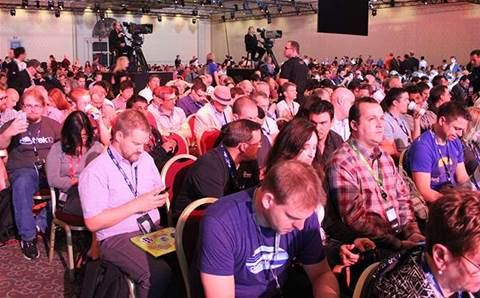 AWS partners gather for the keynote at the Global Partner Summit

Good news for those on long-term Microsoft deals.

"It will be available in the coming weeks. It's imminent," Wise said.

He said customers with long-term licensing agreements would be a prime target of the BYO scheme, ''but really, it's anyone with a Windows operating system licence that wants to bring it over to AWS."

Lead solutions architect for Brisbane AWS partner CloudTrek, Mark Green, said the education sector – a vertical his company is heavily involved in – would be looking forward to the BYOL scheme.

"A lot of these institutions have really favourable education licensing rates with Microsoft," Green said.

Wise said some enterprise software licensing requires the product to be associated with specific hardware, and AWS had now resolved the technical difficulties in meeting this compliance requirement.

"The enabler is the launch of EC2 dedicated hosts," Wise said.

Australian software multinational Atlassian was named as one of the inaugural AWS DevOps competency partners at the summit.

The one-day AWS Global Partner Summit was held as a part of the larger AWS re:Invent conference this week in Las Vegas.

Tony Yoo travelled to AWS re:Invent as a guest of Amazon Web Services.