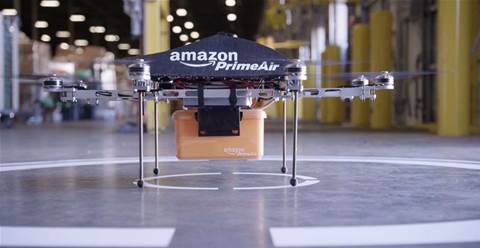 Bezos said the drones — unmanned vehicles that fly through the air — could deliver packages that weigh up to 2.3 kg. That represents roughly 86 percent of packages that Amazon delivers, he said.

The drones, which would pick up items from Amazon's distribution centres and fly them to customer's homes, probably won't be put into use for four or five years, Bezos said.

Amazon said it hoped drones would be able to put products in customers' hands in around 30 minutes.

However, the company noted that delivery drones would be subject to Federal Aviation Administration (FAA) rules that are still being drawn up.

"We hope the FAA's rules will be in place as early as sometime in 2015," Amazon said. "We will be ready at that time."

The e-tailer said that "multiple redundancies" would be built into its drones to ensure public safety, though it did not specify what types of systems it is trialling.

An Australian start-up hopes to be the first company to use drones for deliveries, revealing in mid-October its intention to use the aircraft to deliver textbooks, again subject to civil aviation approvals.