Online retailer and cloud computing provider Amazon gained the hosting of more than one million websites, according to the latest monthly Netcraft Web Server Survey.

Netcraft's January 2013 survey - which includes responses from 629,939,191 websites - shows that Amazon now hosts 9.3 million hostnames, which has doubled during the year.

Amazon also has the largest number of physical and virtual web-facing computers in the January survey, with 139,000 instances recorded by Netcraft. It hosts over five percent of the world's top thousand busiest sites, according to the research company.

A report by Macquarie Capital values Amazon's AWS unit at US$19 to $30 billion (A$18.1 to A$28.6 billion) with the 2013 projected revenue of US$3.8 billion (A$3.6 billion) more than doubling to US$8.8 billion (A$8.4 billion) in two years' time. This represents seven percent of Amazon's total revenue for 2015, with Macquarie noting that AWS is growing faster than the provider's retail business. 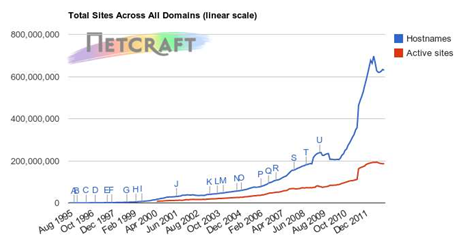 However, Go Daddy remains the largest hosting company in the world with 36 million sites, Netcraft says.

This represents almost six percent of all websites in the world, with Netcraft estimating Go Daddy having just 23,000 web-facing computers compared to the much larger number at Amazon.

Go Daddy operates mainly on a Microsoft platform, with two-thirds of servers running Windows Server and 24 million ASP.NET sites, according to Netcraft.

Amazon in comparison favours the open source nginx web server which Netcraft says is used on 44 percent of all hostnames there with many of these being served by PaaS provider Heroku.