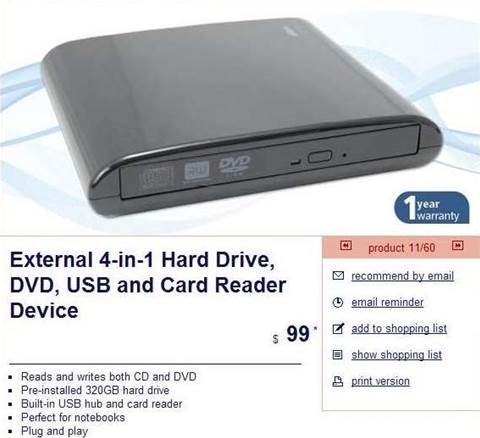 Aldi has pulled the $99 Fission drive found to be infected with a worm.

Aldi is recalling four-in-one Fission external hard drives infected with the Conficker worm and pulling them from shop shelves.

The Australian Computer Emergency Response Team warned consumers yesterday through the Attorney General's department to return the devices bought from the discount chain's shops. Consumers who had used the drives should run anti-virus over their PCs, the groups said. The $99 device had an external hard drive, DVD, USB and card reader.

Aldi said the worm, malicious software that copied itself between devices to infect them, was detected by Kaspersky anti-virus software.

"The manufacturer recommends that this same software or similar be used to scan all customers’ computers and USB storage devices which have been in contact with the four-in-one hard drive, to detect and remove if present," Aldi said.

Conficker infected up to 10 million computers and was the most prolific worm to surface since the Slammer in 2003. It infected banks, hospitals and government agencies in Australia.

It spread through a buffer overflow vulnerability in Windows Server Service where it disabled operating system updates, Security Centre (including Windows Defender) and error reporting. It was found in five versions - A, B, B++, C and E.

The Conficker botnet was dormant and had not received command controls but millions of computers remained infected.