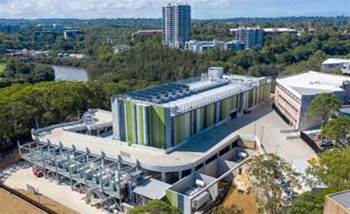 As NEXTDC begins work on S3 in a neighbouring suburb.

AirTrunk has opened the first phase of its SYD2 data centre in Lane Cove West, which it says is one of the largest single-campus data centres in the Asia Pacific.

The facility, which will ultimately have more than 110 megawatts of capacity, will cost over $1 billion and is built on land once eyed by developers for rezoning to build hundreds of apartments.

AirTrunk said in a statement it would have over 370 megawatts of total capacity in Australia, covering SYD2, and existing data centres in Western Sydney and Melbourne.

“SYD2 will offer cloud service providers customised and scalable capacity in the northern suburbs of Sydney,” the company said.

It added that the new facility is “powered by a dedicated 200MVA 132kV substation – one of the largest substations in the state of NSW”.

“SYD2 has all the hallmarks of AirTrunk’s state-of-the-art data centres, and we are well-positioned to offer the scale and service that our global customers need now and into the future,” founder and CEO Robin Khuda said.

SYD2 will be progressively opened in four phases. The company held an opening ceremony marking the first phase opening.

On the same day as AirTrunk’s opening, NEXTDC appointed Multiplex to deliver stage one of its S3 data centre in neighbouring Artarmon.

“This will comprise approximately 26,770 square metres of data halls and ancillary infrastructure.

“S3 Sydney is the third and largest NEXTDC data centre in Sydney and will directly interconnect to the existing S1 and S2 Sydney data centres.”

Multiplex said that construction has commenced and that the facility “will be fully operational in H2 FY22.”