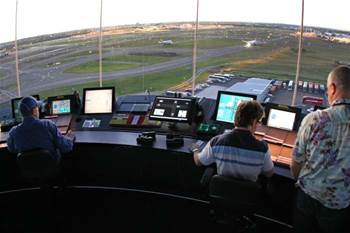 Australia’s aviation services body has abandoned the role of the chief information officer after the resignation of its last CIO in March.

The organisation plans to embark on several significant IT initiatives, including the build of two new data centre facilities, without an IT representative at C-level.

The organisation's most recent CIO, Gordon Dunsford, spent a year in the role before departing earlier this year to relocate to Sydney.

Dunsford had been tasked with implementing a tactical overhaul of IT at Airservices, driving the agency’s $400 million IT strategy and roadmap through the board.

He had replaced former Airservices CIO Anna Townsend, who took over the newly-created position in 2012.

Technology had previously been a function of Airservices' project and engineering division, part of the remit of an executive general manager of engineering.

The air navigation body made the decision to return to this structure following Dunsford’s departure, opting to disband the CIO role and create a new general manager of business systems to replace elements of the CIO function.

The GM position no longer directly reports to the CEO and is understood to have only part of the remit of the former CIO, which includes Airservices’ SAP ERP and desktop computing.

The new role, along with Airservices’ 100-odd IT workforce, now sits within the agency’s engineering division, reporting to the executive general manager of projects and engineering, Mark Rodwell.

A spokesperson for the organisation said the new title better reflected to scope of the position, and provided a “dedicated focus on this important part of the business”.

“Air traffic growth in Australia is expected to increase by 60 percent by the year 2030,” the spokesperson said.

“To meet this challenge Airservices needs to have one integrated team working in both the technology and engineering domains. To achieve this Airservices is bringing together these areas of the business.”

Prior to his departure, Dunsford mapped out an IT strategy and roadmap, which included a desktop modernisation plan, network upgrades and the build of two new data centre facilities.

The agency declined to comment directly on how the strategy would be delivered without a dedicated role, but said the projects would ensure the organisation was well placed to meet customer needs.

In recent weeks Airservices has approached the market for a new internet protocol (IP) network as part of a project to replace its current Aeronautical Data Interchange Network (ADIN), and also went public for two new data centre facilities, which will house Airservices elements of the new national air traffic control system.

ADIN connects 70 sites with telecommunications services for both corporate and operational systems, and interfaces with 5000 airlines, businesses and external systems.

The 14 year old network still uses many of the original pieces of equipment it rolled out with, which has resulted in a network of around 400 switches and 250 routers that are a mix of end-of-life and newer kit. Airservices plans to soon appoint a supplier to refresh the network.

The organisation is also preparing to build two new equipment rooms at its Brisbane and Melbourne air traffic control centres - a result of the ‘oneSKY’ project, which will merge Defence and Airservices’ individual air traffic management systems.

The two organisations have been discussing merging their respective systems - both end of life - since 2010.

Airservices, the project lead, went to tender last July for a supplier for the new system, which will not be signed off until April next year due to an extensive screening, evaluation and negotiation process.

The Tier-3 standard facilities will need to be built by 15th February 2016 in line with the arrival of the new civil and military air traffic control system (CMATS) and a new voice switching system.