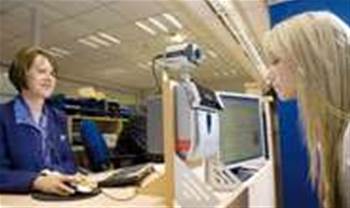 More than two million airline passenger journeys arriving in the UK have used the biometric eye scanners installed at Heathrow, Gatwick, Manchester and Birmingham airports since their introduction in 2006, the UK Home Office has revealed.

The aptly named Iris Recognition Immigration System (IRIS) allows frequent flyers who register for the service to bypass queues at passport control by having their eyes scanned to confirm their identity and automatically perform immigration checks.

Some 300,000 people have registered for the service, and so far 12 machines have been installed at the four airports involved in the scheme.

The UK Border Agency, which runs IRIS, is introducing a variety of technologies to improve immigration and increase security.

By the end of the summer, 10 airport terminals will have facial recognition gates, which check face scans against the biometric details recorded on passports.

The £749 million (AU$1.5 billion) e-Borders system will be used to track all passengers coming into and out of the country, and aims to prevent people leaving the country from which they are travelling without suitable authorisation to enter the UK.

“IRIS combines security with quicker times at immigration controls, helping to avoid queues when arriving back in the UK,” said border and immigration minister Phil Woolas.

“IRIS is a prime example of how the UK’s strong new Border Force is using the latest technology to speed up travel for legitimate passengers while making it more difficult for criminals and illegal immigrants to get into the country.”
Got a news tip for our journalists? Share it with us anonymously here.
Copyright © 2010 Computing
Tags:
airportbiometricsirissecurityuk