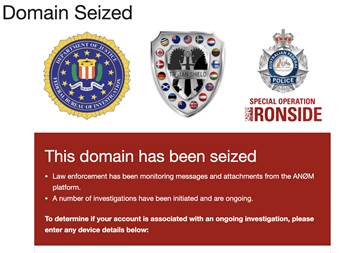 The FBI gained access to the AN0M app in 2018, and started running it clandestinely, installed on Google Android devices that criminals sold to each other.

"The app AN0M was installed on mobile phones that were stripped of other capability," AFP said.

"The mobile phones, which were bought on the black market, could not make calls or send emails. [They] could only send messages to another device that had the organised crime app.

"Criminals needed to know a criminal to get a device,"

With some 11,000 users worldwide, and 1650 people in Australia said to have used the devices running An0m on them, criminals "handcuffed each other".

The anom.io website has been seized by law enforcement, but a cached copy of the website sighted by iTNews indicated that its operators were willing to "fulfill requests for user data" for a processing fee of US$2000, with more money being asked for particularly burdensome queries.

How the FBI was able to gain access to AN0M was not revealed by police.

A copy of a website sighted by iTNews dated March 21 this year criticised the operational security of AN0M, and said it used Google and Amazon Web Services features hosted in the US that made it easy to track users.

"Stay away from AN0M if you value your privacy & safey [sic], they are compromised, liars and your data is running via USA - passed onto law enformcenet and other entities," the site warned.

Over 4000 federal, state and territory police have been executing warrants across Australia in relation to AN0M and Operation Ironside since yesterday, police said.

Since the operation began three years ago, AFP said 3.7 tonnes of drugs, 104 weapons and close to A$45 million in cash had been seized, alongside an unknown number of other assets.

Operation Ironside has seen 224 people arrested in Australia so far, and AFP said it had prevented 20 threats to kill.

Suspects belonging to the Australian-based Italian mafia, bikie gangs, Albanian organised crime and Asian syndicates are among those charged under Operation Ironside.

Along with the AFP, the FBI worked with 18 other police organisations worldwide, calling its operation Trojan Shield.

In New Zealand, 35 people have been arrested by police with $3.7 million in assets seized as part of Operation Trojan Shield.