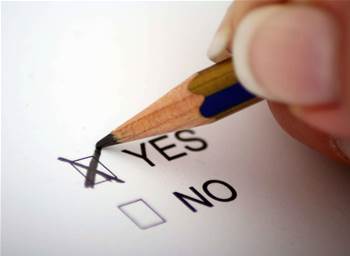 Australia’s official statistics body has found that media and telecommunications businesses are the nation’s most consistent buyers of cloud computing services, but also that the rate of commercial adoption is much more subdued than industry hype may suggest.

The ABS collected data on the use of cloud services from 6640 Australian businesses for the first time in the 2013-14 year, and published the first results of its survey today.

According to its data, less that one in five Australian companies reported using a paid cloud service.

The proportion of those using cloud services increased steadily between sole traders and small businesses with fewer than four employees (16 percent adoption) and businesses employing upwards of 200 people (37 percent).

However, even in the biggest businesses surveyed, those not using cloud services outnumbered those who do.

More than half of the surveyed businesses could not provide a reason for not using cloud services. Across all size categories, 59 percent said “no factors” limited or prevented their use of paid cloud computing.

Amongst those who did identify road blocks, insufficient knowledge of what was on offer was the top reason given, with a steady rate of between 22 percent and 24 percent of businesses of all sizes pleading ignorance.

Amongst the 200+ employee category, the threat of a security breach topped the list of cloud fears, with more than 30 percent of respondents nominating it as an obstacle.

Just over 19 percent of this group also cited uncertainties about the location of data and 20 percent blamed the high cost of cloud services.

Across the whole spectrum, cloud adopters picked simplicity as the most tangible benefit of their business decision over increased productivity, while cost benefits and flexibility came next. Close to half of large busines cloud adopters put a tick in all of these boxes.

Software-as-service was the most popular cloud-based product in all business sizes, followed by storage. Cloud-based compute services were used by less than 15 percent of respondents in all of the smaller size brackets except for those employing 200+ staff, who reported a usage rate of 29 percent.

The ABS was due to have completed a six-month review of the ways it tracks technology-related statistics and the size of Australia's digital economy in Australia last month. It has yet to release its findings.

More detail on the cloud survey can be found on the ABS website.