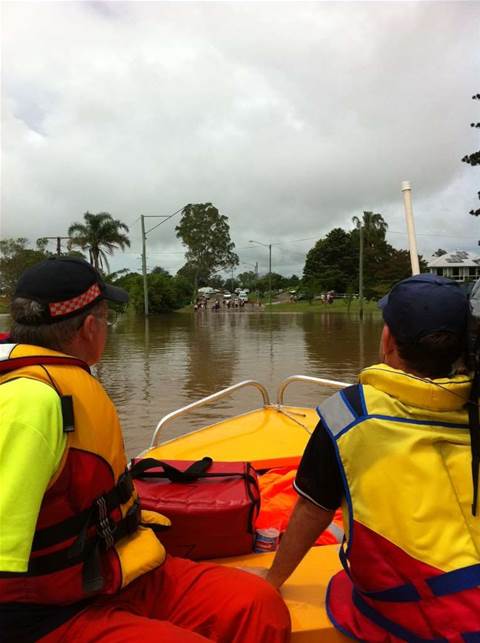 But generators safe above the water line, for now.

AAPT chief executive officer Paul Broad has confirmed that one of the telco's Brisbane points-of-presence suffered the entrance of water during the Queensland floods.

And a second building with co-location facilities was flooded but back-up diesel generators were above the water line and operational, Broad told iTnews.

"Our major customers are on – we haven't lost anyone," he said.

Photos purported to be of one of AAPT's facilities were uploaded to Facebook yesterday.

The company's Powertel dark-fibre network suffered a big cut in a Sydney to Brisbane link that "came in behind Toowoomba".

Broad said engineers were attempting to resplice and join the link.

Fibre connections to flooded exchanges around Toowoomba were impacted but the rest of the network was operating normally, he said.

Broad praised AAPT's technicians and the telecommunications industry for "swapping traffic and pushing the limits of technology".

"When the chips are down the telecommunications industry does deliver," Broad said.

He confirmed that AAPT was working through a priority list of customers affected by the outages, beginning with emergency services, as reported by iTnews earlier today.

"We had some police disaster recovery centres that we needed to keep alive [first]," he said.

Engineers were focused on keeping important interconnect links to other networks alive.

Broad said they were able to "get into the basements" of flood-affected AAPT facilities to inspect them but customers' administrators would have to wait until it was safe.

He said engineers were anxiously awaiting an expected peak in flood waters at 4pm Queensland time today, although high-tide levels were lower than first thought.

For a complete wrap-up of the operating status of Queensland data centres, click here.