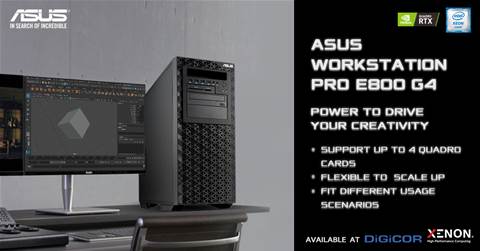 Whatever your requirement for a PC as a tool, Asus’ workstation range has you covered.
Asus Australia

Computers have never been more important and so it’s good to know that they’re faster and more reliable than ever. However, business owners are all too aware that relying upon an off-the-shelf consumer product for business-critical operations brings with it unwelcome, heightened risks that could cause expensive cascade failure should an issue occur. In such a situation, what you need is computer that’s a hard-nosed professional tool: a workstation.

Other groups who need workstations are those who need uncompromising reliability, connectivity, accuracy and power. This would include designers and engineers who use CAD, those who use professional-grade media creation, processing and rendering applications, data scientists and surveillance operatives. Consumer devices often come with compromises in order to meet design, portability and price tag requirements. These can manifest in the form of degraded performance under thermal load, too-few video-out ports and consumer graphics cards which are optimised for games and, as such, cut corners when processing complex scenes that professionals can’t abide.

Asus has all such users covered with its new range of uncompromising workstations. They have all been rigorously tested and ISV certified so you know they will absolutely work out of the box and continue to work into the future. They utilise large amounts of error-checking RAM. They come with improved IT-management capabilities - server-grade software that enables remote, out-of-band and in-band technical support (via Asus Control Centre). Improved security comes via optional TPM 2.0 modules. They also offer multiple configurations that use (sometimes multiple) Intel Xeon and Core processors, server-grade networking and multiple, professional graphics cards. All conform to BSMI, CE, FCC and Energy Star regulatory compliance.

The diminutive E500 G5 SFF is highly configurable and yet has a footprint of just 410 x 96 x 330mm and weighs only 7.5kg. It’s powerful and, despite its size, the features are packed in. Four USB ports adorn the front (two are USB 3.2 Gen1) while six can be found on the back (four are USB 3.2 with two being Gen1 and the other two being Gen2). There are two Gigabit networking ports that can be aggregated together to form a fast 2Gbps pipeline for data transmission. The onboard HDMI, VGA and DisplayPort can be used for versatile applications including triple monitor output, or even mixing with the added on graphics cards, if desirable. There are three expansion spaces, one M.2 (GEN3x4 NVMe or SATA) and two 3.5” bays. Up to 128GB of ECC RAM is supported leaving it plenty of room for expansion. It takes a flexible selection of Intel Xeon E and Core I processors and Nvidia Quadro or AMD Radeon Pro chips to deliver the computing power needed. Full specs can be found here. It’s perfectly suited to graphic design, interior design and industrial design workflows in audio/visual editing, manufacturing and medical imaging industries.

Asus’ Pro E500 G6 ups the ante with its larger, Tower-sized bulk. It can do everything its smaller sibling can but has increased space. It takes either 10th Generation Intel Core I or Xeon W-1200 processors, and up to 128GB of ECC memory, giving it plenty of processing power to take on any job. There’s an extra M.2 slot for fast storage, plus six internal drive bays. There’s native, server-grade 2.5G Base-T NIC and 1G Base-T NIC networking and the same flexible display options as the E500 G5 SFF. It can hold a professional RTX 6000 graphics card for intensive tasks and an additional five PCIe slots. These accompany another two x1 and three long expansion cards. Full specifications can be found here. The new bezel design adds a nice, aesthetic touch that won’t blight a smart office. It’s perfect for professional workflows that require high speed rendering and associated designer work plus scientific simulation within engineering, architecture, construction or surveillance industries.

Matters get more serious with Asus’ Full-Tower E800 G4. The Intel C621 chipset supports both Intel Xeon W-3200 and Scalable series processors up to 28 cores plus, up to 1.5TB system memory across 12 slots. There are five PCIe Gen 3 x16 slots which can support up to four, professional graphics cards plus eight SATA 3 ports, an M.2 Socket 3 connector, eight 3.5-inch drive bays and an optional riser for additional NVMe drives (with VROC support). There’s a powerful, dual-port, Intel X550-AT2 10GbE LAN controller and all the aforementioned I/O connectivity. There’s also an ASMB9-iKVM chip to allow out-of-band tech-support connectivity when the power’s off or it won’t boot. Plus, it’s Nvidia vGPU certified. If you fill it up, an optional 2000W power supply will keep everything running consistently. Full specs, here. It’s perfect for Intensive rendering-associated content-creation work, intensive scientific simulations and machine learning. It’s suited to accelerated engineering, architecture and construction-oriented workflows plus, high-end data analytics.

In a world where computers are professional tools, the E900 G4 is the equivalent of a wrecking ball. Despite bearing a superficial resemblance to its lesser, E800 sibling, inside, it’s a whole, different story. It sports a C621 chipset that supports dual, 28-core Xeon processors along with 1.5 TB RAM. There are seven PCIe 3.0 x16 slots which can support, four, full-size Nvidia Quadro graphics cards at the same time. There are eight 3.5-inch drive bays, an M.2 Socket 3 port plus four U.2 connectors (with VROC support). I/O connectivity is similar to its E800 sibling plus and there are two 5.25-inch optical drive slots. Two, 2000W Titanium PSUs are included – one for redundancy – in order to provide superlative reliability. It comes with the usual ISV certifications plus additional, specialist accreditation from VMWare and Nvidia. Full specs can be found, here. It can operate as a virtual datacentre; is perfect for scalable, scientific simulations; intensive rendering for content creation work; machine learning and is suited to accelerated engineering, architecture and construction-oriented workflows plus high-end data analytics. Rack-mounted options are also available through Asus’ workstation partners, Digicor and Xenon Systems.

Whatever your requirement for a PC as a tool, Asus’ workstation range has you covered. Whether it’s a small, discreet powerhouse or a beefy, mini datacentre, the latest range of workstations is for you. Find out more by clicking, here.

Got a news tip for our journalists? Share it with us anonymously here.
Copyright © CRN Australia. All rights reserved.
Tags:
asus hardware promoted content workstation workstations
By Asus
Nov 13 2020
10:39AM