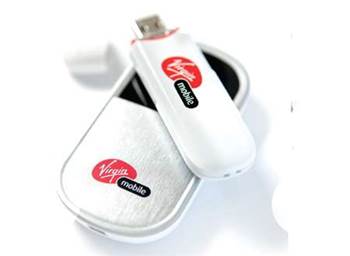 Virgin is a wholly owned subsidiary of Optus, so it wasn’t a surprise to us to see the company offering up Huawei branded modems and doing so on Optus’ mobile broadband network.

We tested with a Huawei E1762 USB Modem, the same model that Virgin provided last year, along with an E585 Pocket Wi-Fi router.

Given Virgin’s youth-focused marketing, it’s somewhat surprising that they don’t offer an iPad MicroSIM product. As with most providers offering Huawei gear, the Virgin client isn’t much more than a splash screen and a basic connection manager.

Given the similarity in hardware and the underlying network between Virgin and Optus, it wasn’t a shock that in performance terms, they went neck and neck in most areas, although Virgin’s signal did edge out its corporate parent by a small margin in a number of places.

Like Optus, and indeed Vodafone and Three, that included areas in our testing where there was no coverage. In Virgin’s case, it was the Wi-Fi modem that couldn’t get signal in either of our regional NSW test areas.

Virgin itself notes that despite being on Optus’ network, they don’t offer service at all in the Northern Territory or Tasmania, so if you live there, it’s not an option. OK, so they’re using much the same hardware on exactly the same network, but where Virgin really stands out is in the significant and surprising difference between the two in pricing.

For a start, Virgin’s offerings in the post-paid space are nowhere near as complex and confusing as Optus’, and there’s also a generous 250MB shaping buffer for over-use before you’re cut off for the rest of your monthly contract period, with the option to buy data top-ups if you need to.

Optus’ on-paper prepaid plans might appear better, but they’re stung with a 10MB minimum usage charge, whereas Virgin goes radically in the other direction, charging data per KB rather than the industry standard of per MB.

This makes Virgin’s pre-paid plans excellent value, especially if you take a longer-expiry prepaid plan and only use it intermittently, as you won’t get stung for data you haven’t actually used.

Virgin isn’t the fastest or most technically nimble, and it doesn’t have the widest overall coverage – those plaudits still belong to Telstra. At the same time, it charges only a fraction of Telstra’s asking price and delivers a comparatively solid connection with excellent per-KB data charging to sweeten the deal.