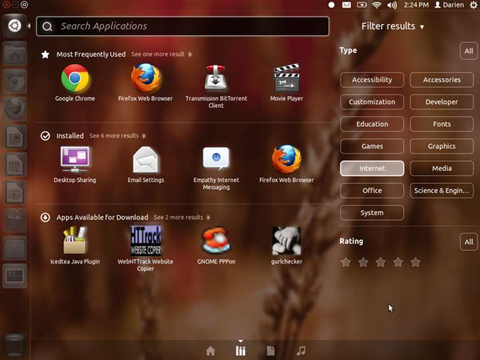 Canonical releases a new Ubuntu distribution every six months, each one coming with an alliterative zoological codename and a version number that reflects the year and month of release.

The last update – Ubuntu 11.04, released in April and dubbed the Natty Narwhal – ditched the familiar Gnome desktop in favour of Canonical’s own Unity interface, previously seen only on netbooks. It was a controversial decision, but one that undeniably gave the friendly Linux distribution a character of its own.

This new edition, dubbed the Oneiric Ocelot (it means “dreamy”), is much less adventurous. It brings no new features to speak of, just a clutch of interface refinements, more like a service pack than a new version.

The search tool has been promoted to the Launcher, with direct links to applications, recent documents and media files. It’s also been given a name – it’s called the “Dash” – and its shortcuts to apps and documents are called “Lenses”. This doesn’t seem to make much sense, but at least it gives Unity a clear vocabulary, which it previously lacked.

Performance is distinctly improved too. On a powerful desktop PC, Ubuntu 11.04 was fast enough to find applications and documents as you typed, but on netbooks – a natural constituency for Ubuntu – searches were frustratingly sluggish. Now, in 11.10, icons pop up instantly, even on lowly Atom hardware.

You can customise the appearance and behaviour of the Launcher via the CompizConfig tool, but bafflingly this still isn’t included or advertised in the standard distribution – it must be downloaded and installed manually. Casual users will therefore probably never see the full flexibility of Unity.

On the positive side, some preferences are easier to access than before: the shutdown icon at the top-right of 11.04 has turned into a cogwheel, offering direct access to commonly used system settings and devices, as well as power options. There’s still no obvious way to remove the unified messaging icon from the menu bar, though.

And if you’ve upgraded from a previous version of Ubuntu, the dropdown messaging menu still directs you to Evolution, even though the default mail client in 11.10 has been changed to Mozilla Thunderbird.

Various included applications are also updated to their latest versions, including Firefox, LibreOffice and the Ubuntu Software Center application. The OneConf tool, which allows you to automatically keep applications synchronised across multiple Ubuntu systems, is now installed by default.

There’s a new backup client too, in the shape of the third-party Déjà Dup backup utility (it appears in the system settings named simply “Backup”). Déjà Dup works in a similar fashion to Apple’s Time Machine, with support for both local and networked storage. By default it backs up your files to your Ubuntu One account.

This is more useful than it might sound, as Ubuntu One clients are now available for Windows, Android and iOS, making the service a rival to the likes of Dropbox for convenient cross-platform file access.

You get a generous 5GB of free storage – expandable to 20GB for $30 a year – and for an extra $40 a year you also get a music streaming add-on that lets you play your tunes over the web or via a smartphone app.

It has to be said, though, that there are any number of competing backup and streaming services, and if you’re already invested in one of them, Ubuntu One probably isn’t compelling enough to switch.

Indeed, that in truth is the problem with Ubuntu as a whole. In a market saturated with preinstalled Windows and OS X, it’s always struggled to make a persuasive case for itself; and though 11.10 is an improvement over 11.04, there’s nothing new here to turn heads.

What’s more, since version 12.04 is set to be an LTS edition – meaning it’ll be supported by Canonical for three years on desktops and five years on servers – we very much doubt the developers will be débuting any immature new technologies in the next release either, suggesting it will be a year before we see any significant new features.

Still, while Ubuntu may not exactly be pushing the envelope, this latest release is a fine consolidation of what’s gone before. Whether you’re an existing user or simply curious to give it a try, the Oneiric Ocelot is Canonical’s most accessible distribution yet, and well worth a download.

Slicker and smoother than its predecessor, 11.10 is a refinement rather than a revolution.