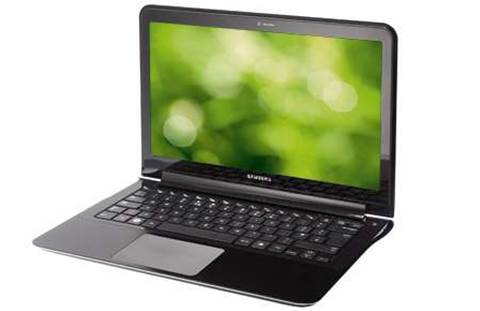 Can it take on the MacBook Air?

In the world of high-end ultraportables, few Windows laptops can rival Apple's MacBook Air. It's an exclusive club: Sony's Z Series and Dell's now-defunct Adamo have provided stiff competition in the past, but few have perfected the formula.

Now, it's Samsung's turn to see if its Series 9 ultraportable is worthy of the luxury laptop crown.

If there's one area where Samsung's Series 9 really hits the mark, it's in the jaw-dropping first impression. It isn't quite as stunningly thin as the MacBook Air, but at barely 17mm thick it's as svelte as Windows laptops come.

What's all the more amazing, then, is that it's a smidgen lighter than Apple's 13-inch MacBook Air. At 1.32kg, this is the very definition of ultraportable.

Tumble it in the hands, and the attention to detail is impressive. The chassis is hewn from duralumin – a tough alloy more commonly used in the aeronautic industry – and it feels pretty sturdy given the barely there weight.

It isn't as taut as the MacBook Air, though: grapple with it and the lid and base flex a little. It might struggle to match the Apple for rigidity, but ergonomically it's right on target.

The soft-feeling Scrabble-tile keys feel just as luxurious as those on the Apple, and we preferred the Samsung's more spacious layout and full-width Enter key.

It's seriously quick for an ultraportable, too. With a low-voltage Intel Sandy Bridge processor allied with a 128GB SSD, the Series 9 feels far faster than you'd expect. From a cold start, the Windows desktop appears in only 20 seconds, and applications spring into life with nary a delay.

Despite the nippy processor, there's more than enough stamina on tap. That's largely thanks to the 6300mAh battery sealed inside the Series 9's chassis, which sees it manage 6hrs 35mins in our light-use test.

Pushed flat out in our heavy-use battery test and with screen brightness set to maximum, a result of 2hrs 29mins is excellent.

Then there's the 13.3-inch display. With a matte finish and an eye-searing brightness of 458cd/m2, the Samsung is perfectly usable in even the most sun-drenched environment.

At first glance, you might also wonder where all the ports have gone. Apart from a tiny power socket by the left-hand hinge, all the Series 9's connectivity is hidden behind two dropdown flaps, one on either flank.

A single USB 2 port, a microSD slot and combination headphone and mic socket are concealed on the right-hand side, while a USB 3 port, micro HDMI and the connect for the supplied Ethernet adapter are on the left.

The selection of ports is generous, but Samsung has had to make notable compromises to squeeze them into such a slim-line chassis.

Although the mere presence of Gigabit Ethernet gives the Samsung one over on Apple's Air, the need to plug in a proprietary adapter cable seems a retrograde step. Plus, while Bluetooth 3 makes the cut, the Broadcom wireless chipset supports only single-band, 2.4GHz operation.

Samsung's Series 9 remains about as refined as an ultraportable can get, but at $2499, that refinement comes at a considerable cost.

Deep-pocketed consumers craving the latest in swish ultraportables will be pleased, but with Apple's MacBook Air due for a Sandy Bridge update, the Samsung's wow-factor may be short-lived.